Pieces of History: Artifacts of the PT Boat Navy (Hardcover) 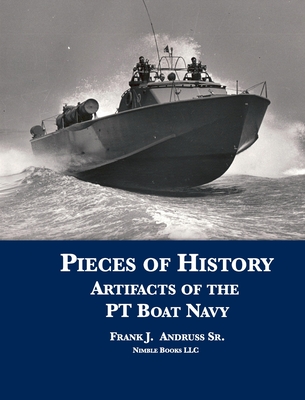 By Frank J. Andruss
This item is not available.

Simply put, there has never been a braver or more dashing collection of US navy sailors, ever. SEALS, naval aviators, submariners, yes, to be sure, they're all very dashing and very brave--but PT boat crews stood in shirtsleeves on the decks of wooden speedboats and sprinted under heavy fire toward enemy warships a hundred times their size. They didn't have Kevlar vests, they didn't have air superiority, and they didn't have stealth technology. They took great risks, in person, at the height of WWII, at the times and in the theaters where the risk of defeat was at its highest. PT Boats fought it out with the enemy under heavy fire, often at night, against warships, planes, barges, and shore installations.

For quite a long time, PT boats and PT boat sailors were incredibly famous. Douglas Macarthur was rescued from the Phillippines aboard a PT boat. The most decorated PT boat captain, Lieutenant John D. Bulkeley, was awarded the Medal of Honor. During the war years PT boat images were plastered on every conceivable type of marketing paraphernalia. Arguably the most handsome and charismatic US President ever, John F. Kennedy, was a PT boat captain and hero. His boat, PT 109, and crew were prominently featured in his 1960 election campaign. Had he survived to serve out two terms and live the full life he deserved, we would still be reading about PT 109. Such is the power and fickleness of myth.

The artifacts that Frank shares with readers do a wonderful job of conveying the feeling of time and place. Myths can and should rise again.

This book includes 239 color images with detailed captions. There is a Foreword by PT boat sailor and World War II veteran Arthur John Frongello, Quartermaster Third Class, who served aboard PT 302 as a member of Squadron 22.

My passion for the history of the PT boats began as a very young child, when, in 1967, my Dad suggested that I watch the movie PT 109. This started my life-long journey in which as a young twenty-year-old I had the pleasure of meeting so many PT boat veterans and started to collect some of these treasured artifacts of the PT Navy. Over the years I would begin to create "The Mosquito Fleet Exhibit" in which I would use these artifacts to tell the story and provide the history that so many people did not know about.

It is my hope that, through these artifacts that were such a large part of PT history, this book brings new attention to the PT navy during World War II. In this book I hope to tell the stories of the brave sailors that served on the boats. PT boats played important roles from the first days of the war. They were in the Philippines, at Guadalcanal, at New Guinea, in the Med, at Surigao Strait. Their crews deserve to be remembered when World War II history is told. Although the PT boat has long since gone, the bravery of the men who rode on her decks should never be forgotten.