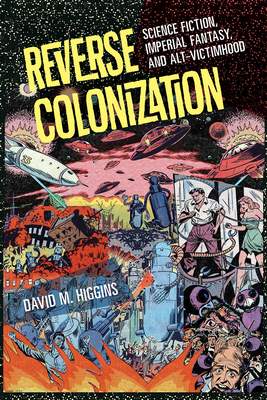 Reverse colonization narratives are stories like H. G. Wells’s War of the Worlds, in which technologically superior Martians invade and colonize England. They ask Western audiences to imagine what it’s like to be the colonized rather than the colonizers. David Higgins argues that although some reverse colonization stories are thoughtful and provocative, reverse colonization fantasy has also led to the prevalence of a very dangerous kind of science fictional thinking in our current political culture. It has become popular among groups such as anti-feminists, white supremacists, and far-right reactionaries to appropriate a sense of righteous, anti-imperial victimhood—the sense that white men, in particular, are somehow colonized victims fighting an insurgent resistance against an oppressive establishment. Nothing could be timelier, as an armed far-right mob stormed the U.S. Capitol on January 6, 2021, in an effort to stop the presidential election from being “stolen from them.”

Higgins shows that this reverse colonization stance depends upon a science fictional logic that achieved dominance within imperial fantasy during the 1960s and has continued to gain momentum ever since. By identifying with fantastic forms of victimhood, subjects who already enjoy social hegemony are able to justify economic inequality, expansions of police and military power, climatological devastation, new articulations of racism, and countless other forms of violence—all purportedly in the name of security, self-defense, and self-protection.

David M. Higgins is senior editor for the Los Angeles Review of Books. He teaches in the English department at Inver Hills Community College. He lives in St. Paul, Minnesota.

“In reading Reverse Colonization, we discover the staggering extent to which the contemporary American political imagination—on all sides—has been furnished by science fiction. Higgins opens an exciting new direction for scholarship in exploring how and why science fiction’s images and fantasies have been so adaptable and so powerful.”—Scott Selisker, author, Human Programming: Brainwashing, Automatons, and American Unfreedom


“Higgins’s thoroughly researched, well-grounded analysis of the science fictional roots of ‘imperial masochism’ is both timely and persuasive. It should become an important reference for work on Anglophone science fiction after WWII, and on the growth of neoliberal ideology and right-wing conspiracy theory in the later twentieth and early twenty-first centuries.”—John Rieder, University of Hawai‘i at Mānoa