A Cross of Thorns: The Enslavement of Californiaas Indians by the Spanish Missions (Hardcover) 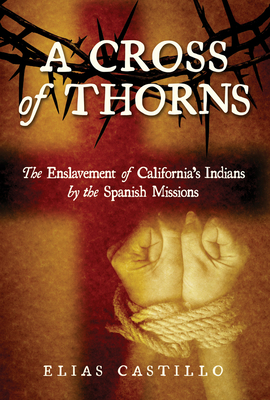 By Elias Castillo
This item is not available.
Out of Print

The Spanish missions of California have long been misrepresented as places of benign and peaceful coexistence between Franciscan friars and California Indians. In fact, the mission friars enslaved the California Indians and treated them with deliberate cruelty. "A Cross of Thorns" describes the dark and violent reality of Mission life. Beginning in 1769, California Indians were enticed into the missions, where they and their descendents were imprisoned for 60 years of forced labor and daily beatings.
The chilling depictions of colonial cruelty in "A Cross of Thorns" are based on little known church and Spanish government archives and letters written by the founder of California's mission, Friar Juniperro Serra (who advocated the whipping of Mission Indians as a standard policy), and published first-hand accounts of 18th and 19th century travelers.
Tracing the history of Spanish colonization in California from its origins in Spain's 18th century economic crisis to the legacy of racism and brutality that continues today, "A Cross of Thorns" is one of the most thought-provoking books ever written on California history.

Elias Castillo is a three-time Pulitzer Prize nominee and the winner of thirteen journalism awards. Born in Mexicali, Baja California, Castillo holds two degrees from San Jose State University and is a former reporter for the San Jose Mercury News and the Associated Press.