To the Edge of the World: The Story of the Trans-Siberian Express, the World's Greatest Railroad (Paperback) 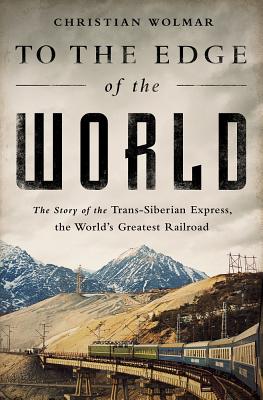 To the Edge of the World is an adventure in travel -- full of extraordinary personalities, more than a century of explosive political, economic, and cultural events, and almost inconceivable feats of engineering. Christian Wolmar passionately recounts the improbable origins of the Trans-Siberian railroad, the vital artery for Russian expansion that spans almost 6,000 miles and seven time zones from Moscow to Vladivostok. The world's longest train route took a decade to build -- in the face of punishing climates, rampant disease, scarcity of funds and materials, and widespread corruption.

The line sprawls over a treacherous landmass that was previously populated only by disparate tribes and convicts serving out their terms in labor camps -- where men were regularly starved, tortured, or mutilated for minor offenses. Once built, it led to the establishment of new cities and transformed the region's history. Exceeding all expectations, it became, according to Wolmar, "the best thing that ever happened to Siberia."

It was not all good news, however. The railroad was the cause of the 1904-1905 Russo-Japanese War, and played a vital -- and at times bloody -- role in the Russian Revolution and the subsequent Civil War. More positively, the Russians were able to resist the Nazi invasion during the Second World War as new routes enabled whole industries to be sent east. Siberia, previously a lost and distant region, became an inextricable part of Russia's cultural identity. And what began as one meandering, single-track line is now, arguably, the world's most important railroad.

Christian Wolmar is a writer and broadcaster, specializing in transportation matters. He has written for major British newspapers for many years and has contributed to many other publications, including the New York Times and Newsday. His most recent books are Blood, Iron, and Gold; Engines of War; and The Great Railroad Revolution. He lives in London.