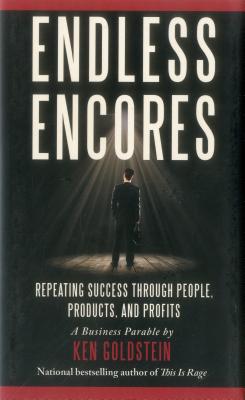 As difficult as it is to have your first big success, most people find it exponentially harder to "repeat" success. So many of us, after "bringing the crowd to its feet," worry that we're going to get booed off the stage with our next venture. Is there a way to avoid this, to have multiple hits and "endless encores?"
Technology executive and bestselling author Ken Goldstein shows the way to repeating success by concentrating on three essentials people, products, and profits, in that order. In this affecting and instructive business parable, he tells the story of a man who has accomplished much but now fears exposure as a fraud and the woman who, as a CEO with multiple successes to her credit, shows him the secret to consistent achievement.
Are you ready to play endless encores? If so, this is your story.

Ken Goldstein advises start-ups and established corporations in technology, entertainment, media, and e-commerce. He served as chief executive officer and chairman of the board of SHOP.COM, a market leader in online consumer commerce acquired by Market America. He previously served as executive vice president and managing director of Disney Online, and as vice president of entertainment at Broderbund Software. Earlier in his career he developed computer games for Philips Interactive Media and Cinemaware Corporation, and also worked as a television executive. He is active in children s welfare issues and has served on the boards of the Make-A-Wish Foundation of Greater Los Angeles, Hathaway-Sycamores Child and Family Services, and Full Circle Programs, and is involved in local government. He speaks and teaches frequently on topics of leadership, executive management, and innovation. He and his wife Shelley, who teaches English as a Second Language, make their home in Southern California. He is the author of one previous book, the novel THIS IS RAGE, which is currently being prepared for a Broadway production."