Ernesto: The Untold Story of Hemingway in Revolutionary Cuba (Hardcover) 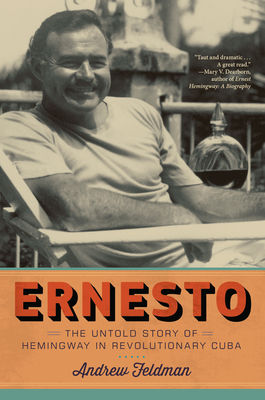 Ernest Hemingway first landed in Cuba in 1928. In some ways he never left. After a decade of visiting regularly, he settled near Cojímar—a tiny fishing village east of Havana—and came to think of himself as Cuban. His daily life among the common people there taught him surprising lessons, and inspired the novel that would rescue his declining career. That book, The Old Man and the Sea, won him a Pulitzer and, one year later, a Nobel Prize. In a rare gesture of humility, Hemingway announced to the press that he accepted the coveted Nobel “as a citizen of Cojímar.”

In Ernesto, Andrew Feldman uses his unprecedented access to newly available archives to tell the full story of Hemingway’s self-professed Cuban-ness: his respect for Cojímar fishermen, his long-running affair with a Cuban lover, the warmth of his adoptive Cuban family, the strong influences on his work by Cuban writers, his connections to Cuban political figures and celebrities, his denunciation of American imperial ambitions, and his enthusiastic role in the revolution.

With a focus on the island’s violent political upheavals and tensions that pulled Hemingway between his birthplace and his adopted country, Feldman offers a new angle on our most influential literary figure. Far from being a post-success, pre-suicide exile, Hemingway’s decades in Cuba were the richest and most dramatic of his life, and a surprising instance in which the famous American bully sought redemption through his loyalty to the underdog.

Andrew Feldman spent two years conducting research in residence at the Hemingway Museum and Library in Havana, Cuba. He has taught at Tulane University, Dillard University, and the University of Maryland. He lives with his wife in New Orleans, Louisiana.

"Andrew Feldman, having explored Hemingway’s Havana haunts and plumbed his literary and personal papers, has produced the definitive look at a definitive part of his life: his years in Cuba."—David Shribman for the LOS ANGELES TIMES

"[An] original portrait of the author's life and work...Feldman's eloquent, evenhanded biography is... A fresh and fair assessment of Hemingway's life and work that refreshingly avoids slipping into hagiography."—Starred KIRKUS REVIEW

"A worthwhile additional portrait of a complex and accomplished human being....Ernesto is a well-written and informative account of one of the 20th century's most captivating writers."—SHELF AWARENESS

"Andrew Feldman has here shaped his sources into that rarest of all things: a Hemingway who feels like a new acquaintance.”—OPEN LETTERS MONTHLY

"For a work that covers as much historical ground as Ernesto does, Feldman’s narrative is taut and dramatic.  He presents a lot of new and fascinating material about Hemingway’s life in Cuba, engagingly played off against a lucid and thorough history of Cuba in the last century.  A great read."—Mary V. Dearborn, author of Ernest Hemingway: A Biography

"For a long time in Hemingway studies, the final and declining two decades of an over-chronicled life were largely misunderstood. Andrew Feldman's readable Ernesto helps to extend our knowledge of Hemingway's complex relationship with his adopted second homeland of Cuba."—Paul Hendrickson, author of Hemingway's Boat: Everything He Loved in Life, and Lost

“Ernesto is among the most important Hemingway titles to appear in recent years. Comprehensive, nuanced, and full of timely new perspectives, what sets this book apart is the author’s attuned and sensible approach to complex political and cultural affairs. Ernesto enriches our understanding of Hemingway in Cuba with perceptive insights on topics that rarely appear in criticism.”—Jeffrey Herlihy-Mera, In Paris Or Paname: Hemingway’s Expatriate Nationalism

“So much has been written about Ernest Hemingway, but this book is outstandingly different. Unlike any other I know, it expresses an understanding of the context: the Cuba Hemingway visited, lived in, and loved. It will be a reference point for any researcher who wants a better understanding of the work of this iconic author, and anyone trying to penetrate the varied, fascinating, and controversial life of the Bronze God of North American literature. This is a book that is worth reading.”—Ada Rosa Rosales, Director, Museo Hemingway Finca Vigia (Cuba)