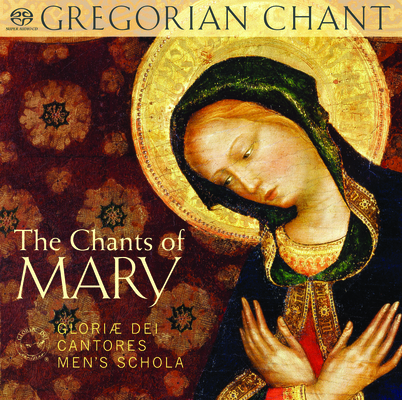 Gloriæ Dei Cantores Men's Schola sings these Gregorian chants of love and devotion to Mary, the Mother of God, the Theotokos, the Star of the Sea. While our names for her are as varied as the traditions that surround her being, one thing remains constant: she invariably points us to her own Son, teaching us to greet Him with that same "yes" by which she opened herself to Him, body, soul and spirit. May we all receive the blessing of her example, told through these ancient songs of faith.

This SACD features the Stabat Mater, the Marian antiphons for Compline, and selected propers from the Feasts of the Immaculate Conception, the Nativity of Mary, the Annunciation, the Visitation, and the Assumption.

Gloriæ Dei Cantores Schola is dedicated to the singing and study of Gregorian chant. Its expertise and experience come from daily chanting of the Liturgy of the Hours as well as the Ordinary and Proper of the Mass at the Church of the Transfiguration in Orleans, MA. The Schola also conducts chant workshops and performs in concert with Gloriæ Dei Cantores. Years of study with Dr. Mary Berry, CBE, founder of the Schola Gregoriana in Cambridge, England, and the monks of St. Peter’s Abbey in Solesmes, France, also contribute to the Schola’s passion for Gregorian chant as a vibrant and living form of sung prayer. Gloriæ Dei Cantores Schola has been critically acclaimed in both Europe and the United States for its proper regard for rhythmic flexibility and its sensitivity to both musical and textural phrase.

Gloriae Dei Cantores (Singers to the Glory of God) holds a passionate dedication to the faithful representation of spiritual and musical authenticity in the choral arts. Sharing its vision of inspiration and hope, the choir has touched the hearts of audiences in twenty-four countries in Europe and Asia, as well as extensive tours and concert series in the United States. The choir's catalog of more than fifty recordings showcases an expansive repertoire, encompassing both masterworks and rarely performed musical treasures from Gregorian chant to the twenty-first century. Richard K. Pugsley and Gloriae Dei Cantores have garnered high praise for bringing lesser- known, yet fully deserving composers and their works to light. The choir makes its home at the Church of the Transfiguration in Orleans, Massachusetts, where it sings worship services throughout the year.

“I am an ardent fan of Gloriae Dei Cantores! The Chants of Mary, by the Gloriae Dei Cantores Men's Schola is a wonderful and faithful recording of ancient chants that still speak volumes today. Chant has a timeless and universal quality, though it was developed in a specific era of the western church. Likewise, a proper understanding of Mary's role in salvation history, and her modeling of life in the church is making her popular again among all Christians. This recording captures the best of this reality!” —John Michael Talbot, Founder, Minister General, and Spiritual Father, The Brothers and Sisters of Charity

“To listen to The Chants of Mary is to be blessed! If you are fond of the Blessed Mother and Gregorian chant, you are in for a real delight. From start to finish, The Chants of Mary delivers both within an impressive and glorious work of melodious art.” —Donna-Marie Cooper O'Boyle, EWTN TV Host

“The Chants of Mary is a true gift for Catholic families. In a world filled with bustle, busyness and noise, the chants included on this CD provide a greatly needed respite, while at the same time drawing our hearts closer to our Blessed Mother, and, through her, to Christ. A gift for the heart, mind, body and soul, The Chants of Mary belongs in every home and will be a timeless treasure in your family's musical library for years to come.”  —Lisa M. Hendey, Founder and Editor of www.CatholicMom.com and author of A Book of Saints for Catholic Moms

“The excellence of interpretation is not surprising. . . skillful semiological interpretations. [The] sequence Stabat mater is superbly executed through its five-minute length. The verses of the offertory Ave Maria too are expertly rendered.” —Fanfare

“. . . [they] sing with unalloyed grace in their voices, powerful, not especially churchlike or considerate of monastic-like uniformity, but as I imagine the music was at one time performed in the public churches. The men of this Schola bring not only a spiritual sense but also some full-blooded and genuinely religious fervor, as if the Latin words on the paper are pregnant with real meaning and an otherworldly mysticism, not just syllables to accompany dull or routine monody. The surround sound is excellent, well-balanced and well-filled. This is yet another superb production (full color booklet and wonderful notes) from a source that sets the example time and time again. Do delve into the clear, cool waters of Gregorian chant and this is a perfect place to start.” — Audiophile Audition