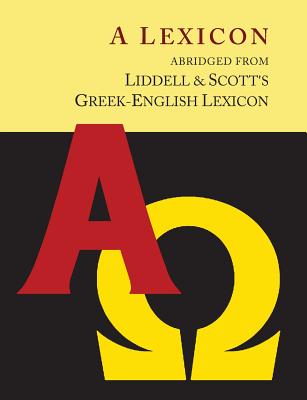 By Henry George Liddell, Robert Scott
This item is not available.

2015 Reprint of Original 1871 Edition. Exact facsimile of the original edition, not reproduced with Optical Recognition Software. LARGE TYPE EDITION. This edition is known as the "Little Liddell. The original lexicon was begun in the nineteenth century and based on the earlier "Handw rterbuch der Griechischen Sprache" by the German lexicographer Franz Passow (first published in 1819), which in turn was based on Johann Gottlob Schneider's "Kritisches Griechisch-Deutsches Handw rterbuch). It has served as the basis for all later lexicographical work on the ancient Greek language, such as the ongoing Greek-Spanish dictionary project Diccionario Griego-Espa ol (DGE). In 1843, the same year as the full lexicon's publication, Oxford University Press published an abridged edition, "A Lexicon: Abridged from Liddell and Scott's Greek-English Lexicon," sometimes called "the Little Liddell". Several revised editions followed. We reprint the 1871 edition from Oxford University Press. We have increased the font size to make this more legible for scholars and students.