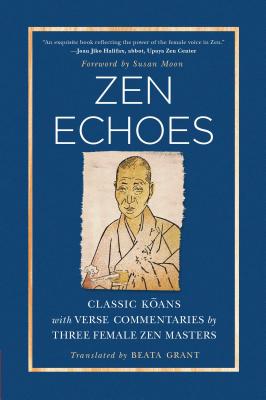 The voices of three female Zen masters reverberate in this much-needed collection. Too often the history of Zen seems to be written as an unbroken masculine line: male teacher to male student. In this timely volume, Beata Grant shows us that women masters do exist--and have always existed. Zen Echoes is a collection of classic koans from Zen's Chinese history that were first collected and commented on by Miaozong, a twelfth-century nun so adept that her teacher, the legendary Dahui Zonggao, used to tell other students that perhaps if they practiced hard enough, they might be as realized as her. Nearly five hundred years later, the seventeenth-century nuns Baochi and Zukui added their own commentaries to the collection. The three voices--distinct yet harmonious--remind us that enlightenment is at once universal and individual. In her introduction to this shimmering translation, Professor Grant tells us that the verses composed by these women provide evidence that "in a religious milieu made up overwhelmingly of men, there were women who were just as dedicated to Chan practice, just as advanced in their spiritual realization, and just as gifted at using language to convey that which is beyond language.

Beata Grant is professor of Chinese and Religious Studies (Department of East Asian Languages and Cultures) at Washington University. She lives in St. Louis, Missouri.