Questioning the Buddha: A Selection of Twenty-Five Sutras (Classics of Indian Buddhism) (Paperback) 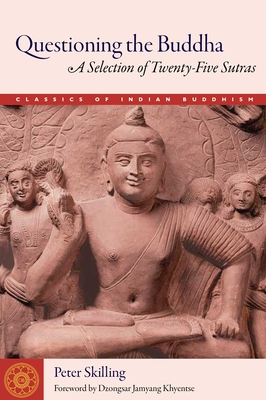 An important new book unlocking the words of the Buddha contained in the vast Tibetan canon, one of the main scriptural resources of Buddhism.

In the forty-five years the Buddha spent traversing northern India, he shared his wisdom with everyone from beggar women to kings. Hundreds of his discourses, or sutras, were preserved by his followers, first orally and later in written form. Around thirteen hundred years after the Buddha’s enlightenment, the sutras were translated into the Tibetan language, where they have been preserved ever since. To date, only a fraction of these have been made available in English. Questioning the Buddha brings the reader directly into the literary treasure of the Tibetan canon with thoroughly annotated translations of twenty-five different sutras. Often these texts, many translated here in full for the first time, begin with an encounter in which someone poses a question to the Buddha.

Peter Skilling, an authority on early Buddhist epigraphy, archaeology, and textual traditions, has been immersed in the Buddhist scriptures of diverse traditions for nearly half a century. In this volume, he draws on his deep and extensive research to render these ancient teachings in a fresh and precise language. His introduction is a fascinating history of the Buddhist sutras, including the transition from oral to written form, the rise of Mahayana literature, the transmission to Tibet, the development of canons, and a look at some of the pioneers of sutra study in the West.

Sutras included in this volume are: Four Dharmas Not to Be Taken for Granted; The Benefits of Giving; The Exposition of Four Dharmas; The Merit of the Three Refuges; Four Dharmas Never to Be Abandoned; Advice for Bodhisatva Dharmaketu; Advice for Bodhisatva Jayamati; Sutra Comparing Bodhicitta to Gold; Bodhisatva Maitreya’s Question about the Gift of the Dharma; Four Summaries of the Dharma Spoken to the Naga King Sagara; The Stanza of Dependent Arising; The Heart Formula of Dependent Arising; Prediction of the Boy Brahmasri’s Future Buddhahood; Ksemavati’s Prediction to Future Buddhahood; The City Beggar Woman; An Old Woman’s Questions about Birth and Death; The Questions of Srimati the Brahman Woman; The Questions of the Laywoman Gangottara; Brahma Sahampati’s Question; Advice to King Prasenajit; Passage to the Next Life; Instructions for King Bimbisara; Instructions for King Udayana; Buddhas as Rare as a Grain of Golden Sand; and Predictions on the Eve of the Great Final Nirvana.

Peter Skilling is a Buddhist researcher, translator, and lecturer on subjects ranging from history and philosophy to art, archaeology, and epigraphy. At present he is a special lecturer at Chulalongkorn University in Bangkok, where he is based. He has published widely and has been visiting professor at leading universities around the world such as Harvard and Oxford. His fields of interest include the history of South Asian and Southeast Asian Buddhism and the development of Mahayana thought.

“In this volume, prose and verse join beautifully to celebrate the Dharma. The selections show how rich, how diverse, and how wonderful the Kangyur is—and how little we know about it.”
— from the foreword by Dzongsar Jamyang Khyentse

“A stimulating and delightfully readable book . . . Peter Skilling is probably the most versatile scholar of Buddhology today, equally conversant with philosophy, history, ritual, doctrine, art, and iconography. He has selected from the Tibetan twenty-five sutras that were lost in India long ago, which he has translated into elegant English. His introduction and first two appendixes together form a most lucid and up-to-date discussion of Buddhist thought that should be compulsory reading in any field of Buddhology.”
— Pratapaditya Pal, author of Quest for Coomaraswamy: A Life in the Arts

“Peter Skilling’s selection of Buddhist sutras comes with an informative introduction, a meticulous exploration of sources, and an attractive and reliable rendering in English. Textual discoveries and expositions of this quality are a substantial contribution to Buddhist studies.”
— Romila Thapar, professor emerita of history, Jawaharlal Nehru University, New Delhi

“A magnificent scholar and a magnificent human being, Peter Skilling has always been an example for us all, for his unbounded erudition combined with an unflinching modesty. It is therefore with gratitude that we welcome the distillation of many years of translation of short but essential sutras. This precious volume will serve as a reference and a source of inspiration to present and future generations.”
— Matthieu Ricard, Shechen Monastery, Nepal

“Peter Skilling is both a consummate scholar and a consummate translator. His rare skills are evident on every page of Questioning the Buddha, a book of beautiful translations of twenty-five sutras, most translated here for the first time. This treasure chest of gemstones, each precious to scholar and practitioner alike, are illuminated by Skilling’s vast knowledge, deep insight, and elegant prose.”
— Donald S. Lopez Jr., Arthur E. Link Distinguished University Professor of Buddhist and Tibetan Studies, University of Michigan

“Peter Skilling’s erudition, wisdom, gentle humor, and devotion to Buddhism and art are summed up magnificently in this large volume. Far beyond what he calls ‘a translation anthology with a long introduction ornamented by a garland of endnotes,’ it offers an artful narrative of the history of Buddhism, a distillation of a lifetime of reading and reflection, and exquisite translations of twenty-five essential Buddhist texts.”
— Stephen F. Teiser, D. T. Suzuki Professor in Buddhist Studies, Princeton University