Atom Land: A Guided Tour Through the Strange (and Impossibly Small) World of Particle Physics (Paperback) 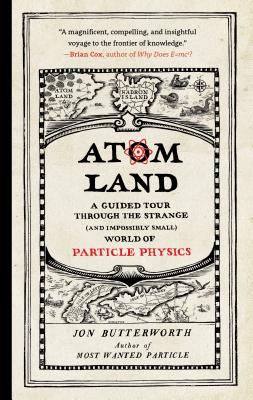 Welcome to Atom Land, a subatomic realm governed by the laws of particle physics. Here, electromagnetism is a highway system; the strong force, a railway; the weak force, an airline. With award-winning physicist Jon Butterworth as your guide, you’ll set sail from Port Electron in search of strange new terrain—from the Isle of Quarks to the very edge of Antimatter. Journey into an unseen world—and to the frontiers of human knowledge.

Jon Butterworth is a professor in the Department of Physics and Astronomy at University College London and a member of the ATLAS collaboration at CERN’s Large Hadron Collider in Geneva, Switzerland. He writes the Life and Physics blog for the Guardian, has written articles for a range of publications including the BBC and New Scientist, and is also the author of Most Wanted Particle, shortlisted for Book of the Year by Physics World. He was awarded the Chadwick Medal of the Institute of Physics in 2013 for his pioneering experimental and phenomenological work in high-energy particle physics. For the last fifteen years, he has divided his time between London and Geneva.

“Take a tour through the subatomic world with a leading physicist at CERN as he explains the electron ports, boson continents and hadron islands you see along the way.”—The New York Times Book Review

“Butterworth weaves a wonderful metaphor of the world of subatomic physics, sure to engage and enlighten laymen about the world of particle physics. . . . Written at a level accessible to a high school or liberal arts student, it still contains enough interesting material to make for enjoyable light reading for a science student. . . . A highly engaging and entertaining book.”—Choice

“An amusing journey through the obscure world of particle physics . . . illuminates the murkiest of concepts.”—Scientific American

“Yearning for a late holiday? Bosonia, the Isle of Leptons and farthest Antimatter beckon in this bracing voyage into particle physics, captained by experimental physicist Jon Butterworth. Ever an original writer, he maps the territory of the standard model and beyond, elucidating in turn wave—particle duality, the quantum field and the subatomic realm, all the way to ripples in space-time and the hunt for the Higgs boson (which, as a veteran of the Large Hadron Collider at Europe's physics lab CERN, he navigates expertly). Sea legs achieved, you’re ready for wilder shores, such as the Dirac—Milne universe.”—Nature

“A magnificent, compelling, and insightful voyage to the frontier of knowledge from a great writer with a deep understanding.”—Brian Cox, author of Why Does E=mc2?

“These are exciting times for fundamental physics, and Butterworth describes with clarity, humor, and enthusiasm the lie of the land at the ultimate frontier. You will not find a better tour guide.”—Times Higher Education