The Popular History of Graffiti: From the Ancient World to the Present (Hardcover) 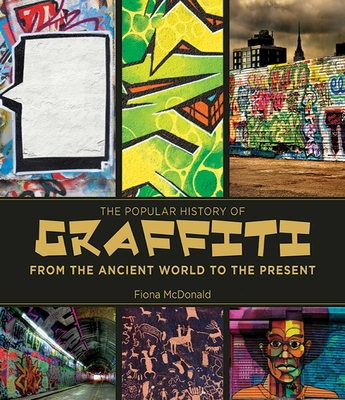 What is graffiti? And why have we, as a culture, had the urge to do it since 30,000 BCE? Artist Fiona McDonald explores the ways in which graffiti works to forever compel and simultaneously repel us as a society. When did graffiti turn into graffiti art, and why do we now pay thousands of dollars for a Banksy print when just twenty years ago, seminal graffiti artists from the Bronx were thrown into jail for having the same idea? Graffiti has not always been imbued with a sense of aesthetic, but when and why did we suddenly “decide” that it is worthy of consideration and criticism, just within the past few years?

Throughout history, graffiti has served as an innately individualistic expression (such as Viking graffiti on the walls of eighth-century churches), but it has also evolved into a visual and narrative expression of a collective group. Graffiti brings to mind not only hip-hop culture and urban landscapes, but petroglyphs, tree trunks strewn with carved hearts symbolizing love, and million-dollar works of art. Learn about more graffiti artists and rebels such as: the band Black Flag, Lee Quinones and Fab 5 Freddy, Dandi, Zephyr, Blek le Rat, Nunca, Keith Haring, and more! Illustrated with stunning full-color photos of graffiti throughout time, The Popular History of Graffiti promises to be an important and dynamic addition to graffiti literature.

Fiona McDonald has wanted to make beautiful things for a living since she was a little girl. To further this dream, she spent four years of intensive study at the Julian Ashton Art School in Sydney, Australia. From there she moved to the Blue Mountains and began making painted cloth dolls and figurative sculpture. After Fiona’s son was born, she enrolled at university to study literature. Fiona has two grown-up children and a granddaughter. She lives with her three dogs, cat, rabbit, and ancient hen.