Pinocchio: The Making of the Disney Epic (Hardcover) 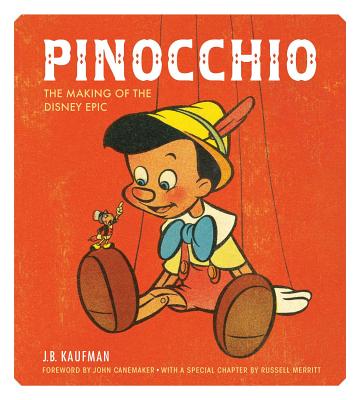 In 1940, Walt Disney released his second feature film: Pinocchio, based on Carlo Collodi’s 1883 Italian children’s novel. The film was groundbreaking: it pioneered the latest animation and sound technology of the era, and established a blueprint for Disney filmmaking that remains intact today. It became the first animated feature to win a competitive Academy Award® (in fact, it won two), and earned a place on the roster of the National Film Registry. Pinocchio’s crucial role has endured decades, given its rare 100% rating on the film website Rotten Tomatoes and the lively discourse that continues to surround the film today.

Academy Award-winning animator and film historian John Canemaker says of Pinocchio: “In great detail, J. B. Kaufman reveals the struggles, triumphs and disappointments encountered by Disney and his staff during the creation of this sacred monster of a film. Woven here is a once-upon-a-time story sure to fascinate and inform readers, an exciting adventure into the inner workings of a one-of-a kind studio and team at its creative peak.”

Go behind to the scenes with stories of the inner workings of the Golden Age of Animation, the animators’ personalities and story changes like why Jiminy Cricket’s character almost got left on the cutting room floor. Over 300 photographs, illustrations and concept sketches – many of which are available for the very first time – accompany the story behind the story.

Become a part of the wild, legendary ride that was the making of Pinocchio.

J.B. Kaufman is an author and film historian who has published extensively on topics including Disney animation and American silent film. He is the author of The Fairest One of All, Snow White and the Seven Dwarfs: The Art and Creation of Walt Disney’s Classic Animated Film, South of the Border with Disney, and coauthor, with Russell Merritt, of Walt in Wonderland: The Silent Films of Walt Disney (winner of the Kraszna-Krausz Award and the Society for Animation Studies’ Norman McLaren-Evelyn Lambart Award, and chosen by The New York Times as a Notable Book of the Year), and Walt Disney’s Silly Symphonies. He has also been a regular contributor to the Griffith Project at Le Giornate del Cinema Muto, the distinguished annual silent-film festival in Pordenone, Italy, and speaks frequently on Disney, silent film history, and related topics.

The Walt Disney Family Museum, owned and operated by the Walt Disney Family Foundation, opened in 2009 in San Francisco. Co-founded by Walt’s daughter, Diane Disney Miller, and grandson, Walter Miller, the museum celebrates the genius and spirit of Walt Disney, a risk-taker whose artistry, imagination and vision influenced popular culture through animated and live-action films, television programs, theme parks and new technologies. Walt’s contributions live on today in the museum’s exhibits and education programs, which share the fascinating story of the man who raised animation to an art, transformed the film industry, tirelessly pursued innovation, and created a global, distinctively American legacy.

“J.B. Kaufman’s latest book on the making of Pinocchio (1939) is masterful – and a must-have… Have a copy of the movie handy to re-watch as you read – his writing will have you appreciating Pinocchio as you have never before.”
— Jerry Beck

“This visually stunning and impeccably researched history of Disney's Pinocchio is both a revelation and a fascinating look at the development and production of what has become one of the greatest animated features of all time.”
— Forces of Geek

“Anytime J.B. Kaufman puts out a new book, you know it’s going to be out-of-this-world incredible. His newest release, Pinocchio: The Making of the Disney Epic, is no exception. It perfectly details and encapsulates the making of one of Walt Disney’s greatest masterpieces, Pinocchio.”
— Rotoscopers