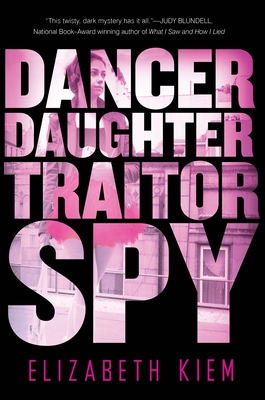 This is book number 1 in the The Bolshoi Saga series.

A timely YA thriller—part John Le Carré and part The Americans—about a Bolshoi ballerina trapped by family secrets and a legacy of espionage.

Marina is born into privilege. A talented young dancer with Russia’s Bolshoi Ballet at the height of the Cold War, she seems destined to follow in the footsteps of her mother Svetlana, a Soviet Artist of the People. But when Svetlana disappears without explanation, Marina and her father have to get out. Fast. They defect to America, hoping they’ve  escaped Russia’s secret police, hoping they can make a fresh start in New York. Instead they discover the web of intrigue around Brooklyn’s Brighton Beach is as tangled as the one they left behind.

Elizabeth Kiem studied Russian language and literature at Columbia University and lived in Russia immediately after the collapse of the Soviet Union. Her nonfiction work can be read all over the world wide web. She is also the author of two other books in the Bolshoi Saga: Hider, Seeker, Secret Keeper and Orphan, Agent, Prima, Pawn. She lives in London.

“Dancer, Daughter, Traitor, Spy culminates in a tangle of bad guys and intrigue.... [Evokes] the bleakness and nostalgic charms of the early 1980s [in Russia]. The results are enjoyably escapist. For [readers] enamored with the Russia of literature and film, who want something slightly more contemporary.”
—The New York Times

"Terrifying . . . Historical fiction meets spy thriller, Dancer, Daughter, Traitor, Spy is sure to keep you on the edge of your seat."
—Dance Spirit Magazine

“In a world where nothing makes sense, what is sanity? . . . This atmospheric, suspenseful story is one of devotion and deception,  innocence and independence, friendship and love, music and dance, immigration and coming of age.”
—Booklist, Starred Review

"Pays apt homage to John le Carré . . . Creates the mood of the oppressive, fearful state of Communist Russia that persists outside its borders, and builds levels of intrigue that lead to a devastating climax."
—Publishers Weekly

"Sophisticated storytelling with complex characterization and details that provide color and texture... A compelling portrait of a young woman on the verge of adulthood, caught up in the domestic secrets of her parents and the enmity of two countries."
—Kirkus Reviews

"I love a book that plunges me headlong into an unfamiliar world. This twisty, dark mystery has it all—terrible choices, narrow escapes, last chance gambles, and the desperate risks you’ll take to save the person you love."
—National Book Award Winner Judy Blundell

"Dancer, Daughter, Traitor, Spy has it all: love, death, ballet, and pop music during the Cold War '80s. A romantic, suspenseful, and gracefully-written novel."
—Natalie Standiford, author of How to Say Goodbye in Robot and Confessions of the Sullivan Sisters

"Fascinating . . . The twists and turns, as Marina tries to decide whom she can really trust, keep readers guessing right up to the end, just as a good spy novel should."
—School Library Journal

"Think The Girl With the Dragon Tattoo meets Sookie Stackhouse."
—Brooklyn Based

“Kiem has a way with language that brings her surroundings to life whether it's 1982 Russia with its long bread lines, Brighton Beach with its Russian gangsters or the dirty streets of Manhattan.”
—Fresh Fiction