Death by His Grace (A Darko Dawson Mystery #5) (Hardcover) 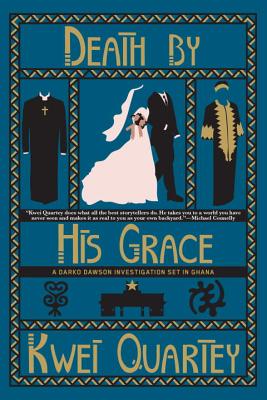 By Kwei Quartey
This item is not available.
Hard to Find

This is book number 5 in the A Darko Dawson Mystery series.

Atmospherically set in Accra, Ghana, Chief Inspector Darko Dawson investigates the brutal murder of a high-society bride. In order to expose the truth, Darko must confront the pivotal role religion plays in Ghana—and wrestle with his old demons the investigation stirs up in the fifth entry to the African series.

Katherine Yeboah’s marriage to Solomon Vanderpuye is all the talk of Accra high society. But when it becomes apparent that Katherine is infertile, Solomon’s extended family accuses her of being a witch, hounding her until the relationship is so soured Solomon feels compelled to order Katherine out of the house they shared. Alone on her last night there, Katherine is brutally murdered by an intruder.

Chief Inspector Darko Dawson of the Ghanaian federal police has personal as well as professional reasons to find the killer fast: Katherine was the first cousin of his wife, Christine, who is devastated by the tragedy. As Darko investigates, he discovers that many people close to Katherine had powerful motives to kill her, including: Solomon, her husband; James Bentsi-Enchill, her lawyer and ex-lover; and her filthy rich pastor, Bishop Clem Howard-Mills. In order to expose the truth, Darko must confront the pivotal role religion plays in Ghana—and wrestle with his old demons the investigation stirs up.

Kwei Quartey is a crime fiction writer and retired physician based in Pasadena, California. Quartey was born in Ghana, West Africa, to a Ghanaian father and a black American mother, both of whom were lecturers at the University of Ghana. His novel Wife of the Gods made the Los Angeles Times bestseller list in 2009. The following year, the National Book Club voted him Best Male Author. He has two mystery series set in Ghana: the Detective Inspector Darko Dawson investigations  and the Emma Djan investigations.

Praise for Death by His Grace

"Vastly engaging . . . Apart from the thrill of the detecting, Death By His Grace offers an education in Ghana’s history, social life, eating habits and other customs peculiar to that endlessly intriguing country."
—The Toronto Star​

"There’s plenty of delicious Ghanaian food mentions to salivate over and a friendly overview of Accra’s plentiful neighborhoods, but Quartey covers the bad as well as the good: an inherent part of the plot here includes the workings—and cons—of a charismatic church and its self-enriching leader."
—The Seattle Review of Books

"This is a delightful novel, rich in Ghanian culture, with a hero we really come to admire."
—Reviewing the Evidence

Praise for the Darko Dawson investigations

"Quartey provides such a strong sense of Ghana that you'll be wishing for a platter of kenkey, a staple food made from fermented corn, to keep you from biting your nails to the quick as Dawson winnows down the list of suspects to solve the mystery."
—Oprah.com

“A sensitive novel of powerful family passions, set in the unique and vivid colors of Ghana.”
—Anne Perry

"An absolute gem of a first novel and the sort of book that will delight not only hard-core mystery fans, but also those who visit the genre only casually in search of an occasional literary entertainment . . . Wife of the Gods undoubtedly will be compared with Alexander McCall Smith's phenomenally successful No. 1 Ladies' Detective Agency series, but Quartey's debut is—to this reader, at least—a far richer and more sophisticated experience."
—Los Angeles Times

"Quartey’s mastery of the art of misdirection serves him well . . . A complex plot, combined with a warts-and-all lead and an evocative portrayal of the author’s native country, add up to a winner."
—Publishers Weekly, Starred Review