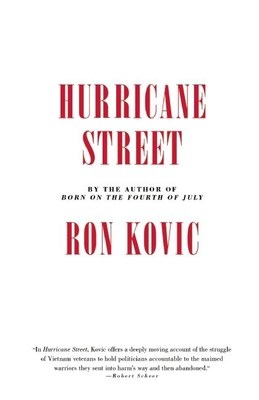 "Hurricane Street... is] another raw expose on the cost of war. The book, which he calls a prequel, drills deep into the 17-day drama of a 1974 sit-in and hunger strike staged by Kovic and a band of fellow wounded veterans who took the federal building on Wilshire Boulevard by storm...The book is an unflinching anti-war declaration, written in blood and the sweat of too many haunted nights by a Vietnam Marine Corps sergeant who later opposed the wars in Iraq and Afghanistan."
--Los Angeles Times

"The author of Born on the Fourth of July (1976) recounts the brief 1974 movement he initiated to change how Veterans Affairs hospitals cared for wounded soldiers...The great strength of this book is that the author never minces words. With devastating candor, he memorializes a short-lived but important movement and the men who made it happen. Sobering reflections on past treatment of America's injured war veterans."
--Kirkus Reviews

" A] compelling snapshot of early 1980s activism....Without social media or cell phones to boost the signal, it was Kovic's flair for the dramatic and ability to marshal reporters that turned the protest into a battle victory....Kovic's updates on the fates of his fellow veterans provide a memorable and bittersweet conclusion."
--Publishers Weekly

"The author of the bestseller Born on the Fourth of July writes an impassioned and timely memoir about the 1974 American Veterans Movement that will strike a chord with veterans and their families today."
--Publishers Weekly, Top 10 Pick for Spring 2016

"Kovic, a Vietnam veteran paralyzed from the waist down and the author of the seminal war memoir Born on the Fourth of July (1976), looks back to the spring of 1974, when he led a two-week hunger strike in the Los Angeles office of U.S. Senator Alan Cranston . . . Kovic's personal tale is also a timely topical book as veterans' mental and physical health care remain woefully insufficient."
--Booklist

"Kovic has also penned a new book, Hurricane Street, that will be released on July 4th. The new book recounts how in 1974, the author and other injured veterans staged a sit-in and hunger strike to demand better treatment for vets."
--Rolling Stone

"Renowned antiwar activist Kovic, a Vietnam veteran, delivers a powerful memoir detailing his organization of the American Veterans Movement (AVM) during the mid-1970s . . . This chronicle will resonate with those interested in the all-too-human effects of war and the challenges faced by our wounded warriors."
-- Library Journal

"Forty years after the release of Born on the Fourth of July, the 1976 memoir that became the 1989 Academy Award-winning film starring Tom Cruise, author Ron Kovic gives us Hurricane Street, a memoir about his 1974 movement to change the way Veterans Affairs hospitals cared for wounded soldiers."
--Parade

In the spring of 1974, as the last American troops were being pulled out of Vietnam, Ron Kovic and a small group of other severely injured veterans in a California VA hospital launched the American Veterans Movement. In a phenomenal feat of political organizing, Kovic corralled his fellow AVM members into staging a sit-in, and then a hunger strike, in the Los Angeles office of Senator Alan Cranston, demanding better treatment of injured and disabled veterans.

This was a short-lived and chaotic but ultimately successful movement to improve the deplorable conditions in VA hospitals across the country. Hurricane Street is their story--one that resonates deeply today--told

Ron Kovic served two tours of duty during the Vietnam War. He was paralyzed from his chest down in combat in 1968 and has been in a wheelchair ever since. Along with Oliver Stone, Kovic was the coscreenwriter of the 1989 Academy Award-winning film based on Kovic's best-selling memoir Born on the Fourth of July (starring Tom Cruise as Kovic).