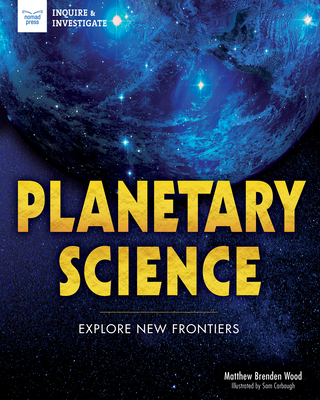 What do you see when you look up into the sky at night? The moon, stars, maybe even a comet or asteroid? You can also see other planets

In Planetary Science: Explore New Frontiers, readers ages 12 to 15 embark on a journey through the solar system and beyond, exploring planets, moons, dwarf planets, exoplanets and everything in-between. For many ancient cultures, planets were mysterious objects that moved against the backdrop of the heavens in strange but predictable patterns. Ever since Galileo Galilee first used a telescope to explore the moons of Jupiter, we've known that the planets are much more than mysterious points of light in the night sky. With the creation of incredible technologies such as space probes, giant ground-based telescopes, and Earth-orbiting observatories, we've learned that Mars once had water on its surface, that Jupiter's Great Red Spot has been churning for centuries, and that thousands of exoplanets circle distant suns. Planetary science is also exciting because of what we don't know. Was there ever life on Mars? Is Planet Nine lurking in the outer reaches of the solar system? Will we ever find another Earth? How far can we go? In Planetary Science, readers examine the latest information on Pluto, the discoveries of the Mars rover Curiosity, and the incredible catalog of distant planets uncovered by the Kepler Space Telescope. They learn about how planets are formed and why they travel on their orbits. Planets, those pinpricks of light you might spot on a clear night, come closer through informative illustrations, links to online primary sources, illuminating sidebars and fun facts, and hands-on, in-depth activities, such as building scale models of planets, hunting for alien worlds through citizen science, and crafting a comet in the kitchen. Planetary Science also promotes critical thinking skills through inquiry, discovery, and research by encouraging readers to explore questions that remain unanswered, such as whether Mars once had life or the possibility of a ninth planet hiding in the furthest reaches of the solar system. With discoveries being made almost every day, it's an exciting time to be a planetary scientist

Matthew Brenden Wood, author of The Science of Science Fiction, is a math and science teacher with a passion for STEAM education. He is also an avid amateur astronomer and astrophotographer. Wood holds a bachelor's degree in astronomy from the University of Massachusetts at Amherst and lives in Phoenix, Arizona. Sam Carbaugh has illustrated several books for Nomad Press, including Forensics: Uncover the Science and Technology of Crime Scene Investigation and Shakespeare: Investigate the Bard's Influence on Today's World, and he wrote and illustrated Comics: Investigate the History and Technology of American Cartooning. Sam lives in Grand Rapids, Michigan.