Sealing of the Five Senses: Advanced Practices for Becoming a Taoist Immortal (Paperback) 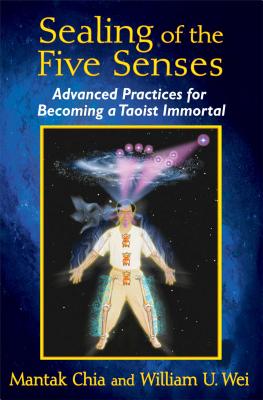 An illustrated guide to follow the path to the Immortal Tao

• Reveals the 9 inner alchemy formulas for the Sealing of the Five Senses practice, including strengthening the senses and activating the Thrusting Channels

• Explores how abuse of the senses leads to energy loss and degradation, for example, listening too much hurts the mind

• Explains how to transmute warm chi into energy for the immortal spirit body, created through mastery of the three Kan and Li practices

In ancient times, the Sealing of the Five Senses involved both Taoist Inner Alchemy and physical sealing of the sensory organs to prepare the master for extended periods of astral travel and meditation, during which he would remain completely motionless for years at a time. In modern times, physical sealing of the senses with wax is no longer required; however, in order to accumulate profound energy and gather cosmic light for the immortal spirit body one must stop the energy losses that occur through the senses.

In this guide to energetic sealing of the senses, Master Mantak Chia and William Wei reveal the 9 inner alchemy formulas for the Sealing of the Five Senses practice, including strengthening the senses, connecting the senses to the organs, activating the Thrusting Channels, and harnessing the energies of the Big Dipper and the North Star. They explain how to stop energy losses through the five senses and transmute warm chi into energy for the immortal spirit body. The authors explore the importance of proper diet and eating habits in this practice, providing striking examples of World War II concentration camp survivors who were able to obtain energy from chewing water.

Revealing the benefits of Sealing the Five Senses for non-Immortals, the authors explain how abuse of the senses leads to energy loss and degradation, for example, listening too much hurts the mind and crying too much harms your blood. They show how sealing the senses allows one to create the Crystal Room cauldron, where fire and water energy can couple to generate a superior essence used to achieve greater awareness and “steam” all the body’s major organ systems.

An advanced practice for those who have mastered the three Kan and Li practices, the Sealing of the Five Senses is the final step on the Taoist path to Immortality.

A student of several Taoist masters, Mantak Chia founded the Healing Tao System in North America in 1979 and developed it worldwide as European Tao Yoga and Universal Healing Tao. He has taught and certified tens of thousands of students and instructors from all over the world and tours the United States annually, giving workshops and lectures. He is the director of the Tao Garden Health Spa and the Universal Healing Tao training center in northern Thailand and is the author of 50 books, including Taoist Foreplay, Inner Smile, Cosmic Fusion, Sexual Reflexology, and the bestselling The Multi-Orgasmic Man.