The Return of Holy Russia: Apocalyptic History, Mystical Awakening, and the Struggle for the Soul of the World (Hardcover) 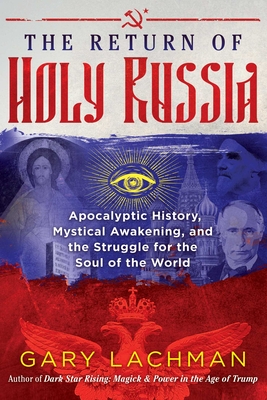 At the turn of the 20th century, a period known as the Silver Age, Russia was undergoing a powerful spiritual and cultural rebirth. It was a time of magic and mysticism that saw a vital resurgence of interest in the occult and a creative intensity not seen in the West since the Renaissance. This was the time of the God-Seekers, pilgrims of the soul and explorers of the spirit who sought the salvation of the world through art and ideas. These sages and their visions of Holy Russia are returning to prominence now through Russian president Vladimir Putin, who, inspired by their ideas, envisions a new “Eurasian” civilization with Russia as its leader.

Exploring Russia’s long history of mysticism and apocalyptic thought, Gary Lachman examines Russia’s unique position between East and West and its potential role in the future of the world. Lachman discusses Russia’s original Slavic paganism and its eager adoption of mystical and apocalyptic Eastern Orthodox Christianity. He explores the Silver Age and its “occult revival” with a look at Rasputin’s prophecies, Blavatsky’s Theosophy, Roerich’s “Red Shambhala,” and the philosophies of Berdyaev and Solovyov. He looks at Russian Rosicrucianism, the Illuminati Scare, Russian Freemasonry, and the rise of other secret societies in Russia. He explores the Russian character as that of the “holy fool,” as seen in the great Russian literature of the 19th century, especially Dostoyevsky. He also examines the psychic research performed by the Russian government throughout the 20th century and the influence of Evola and the esoteric right on the spiritual and political milieus in Russia.

Through in-depth exploration of the philosophies that inspire Putin’s political regime and a look at Russia’s unique cultural identity, Lachman ponders what they will mean for the future of Russia and the world. What drives the Russian soul to pursue the apocalypse? Will these philosophers lead Russia to dominate the world, or will they lead it into a new cultural epoch centered on spiritual power and mystical wisdom?

Gary Lachman is an author and lecturer on consciousness, counterculture, and the Western esoteric tradition. His works include Dark Star Rising, Beyond the Robot, and The Secret Teachers of the Western World. A founding member of the rock band Blondie, he was inducted into the Rock and Roll Hall of Fame in 2006. He lives in London.

“Russia is neither the West nor the East. It is both. And it participates in deep Christian mystical, indigenous, esoteric, and occult currents that were mostly lost or forgotten in Western Christianity and actively suppressed in secular modernity. In his new book, Gary Lachman shows us why the return of these esoteric currents via the new (and old) claim of a ‘Holy Russia’ is so important, why such nationalist theologies cannot really be our answer, but also why particular Russian thinkers can point us in the right direction--toward a ‘third way’ beyond pure reason and past faith toward a new or future gnosis, or knowing-with, that ‘all is good.’ This sounds outrageous to many a modern ear, of course. Hence the importance of this book.”
— Jeffrey J. Kripal, author of Secret Body: Erotic and Esoteric Currents in the History of Religions

“Gary Lachman’s The Return of Holy Russia, gives us perspectives on Russia’s spiritual history we sorely need. It helps us understand why the Putin administration has trouble giving up its entanglements with Ukraine, why many Russians will match their claims of ‘exceptionalism’ against America’s, why Russian thinkers reject America’s claim to worldwide moral leadership, and why Transpersonal Psychology is flourishing to a greater degree in Russia than it is in American where it was born. Today, as Russia and the West sink into confrontations that threaten the world with accidental nuclear war, we need the rich understandings of Russia’s culture that Lachman’s book provides.”
— Michael Murphy, cofounder and Chairman Emeritus of the Board of the Esalen Institute

“Gary Lachman is a writer with an elegantly readable style, a passionate interest in aspects of the world that history normally neglects, and a profound understanding of psychology. In The Return of Holy Russia he has found his ideal subject. It’s an intoxicating examination of the intense and distinctive relationship between Russian culture and religious feeling, of the kind that flowered into exotic cults and occult beliefs in the late nineteenth century, seemed to go underground during the Soviet Union, and may now be emerging again in Vladimir Putin’s authoritarian regime. I read it with delight.”
— Philip Pullman, award-winning author of the trilogy His Dark Materials

“This book seeks to frame Putin’s own political philosophy within that of his self-declared mentors in Russia’s pre-Soviet Silver Age of the early twentieth century--and more broadly to the overarching spiritual history of Russia, neglected by mainstream historians but vital to an understanding of that country’s destiny in a post-Soviet world. The values of the Silver Age philosophers that Putin misapprehends and distorts, Lachman tells us, are the very ones the rest of the world might well adopt to ensure the future well-being of our planet.”
— Victoria Nelson, author of The Secret Life of Puppets

“In this unprecedented and gloriously learned book, Gary Lachman explores how Russia, the indestructible nation, is in many regards the historical repository for the mystical traditions of the East and West and, as such, harbors an unforeseen destiny in our world. The Return of Holy Russia is a startlingly brave and thrilling work of historicism and political-mystical philosophy. I found it absolutely enthralling.”
— Mitch Horowitz, PEN Award–winning author of Occult America and The Miracle Club

“This is Gary Lachman’s most profound work so far, and the most topical. Like his admired Colin Wilson, he can convey in one book the harvest from a hundred others. The overview of Russian history here is an example, leading up to the Silver Age when the perennial search for national identity included psychic awareness and spiritual aspiration. Major players, many of them familiar from Gary’s other works, are Blavatsky, Steiner, Ouspensky, Roerich, Rasputin, Papus, and the Christian philosophers Berdyaev and Solovyov. The surprise is that a century later, under Vladimir Putin, the philosophies and ideals of that age are being revived and actively promoted. While the leading thinkers of the West deny any meaning to the cosmos or to human history, Russia seems to have taken a philosophical turn well worthy of study and respect.”
— Joscelyn Godwin, author of The Greater and Lesser Worlds of Robert Fludd

“Gary Lachman has that rare ability of the best public intellectual, which is to redact and convey complex ideas without dumbing them down. In his new book, Lachman shows us again what he does best, pointing out the hidden significance of what most scholars have ignored. For nearly a century, Russia was largely cut-off from the rest of the Western world and consequently its spiritual heritage forms a blind spot in the minds of the reading public. What do Greek Orthodox Christianity, ideas of a Third Rome, medieval Russian paganism, 19th-century Russian Romanticism, the Silver Age at St. Petersburg’s Stray Dog Café, and Vladimir Putin have in common? Lachman not only tells us but also makes a strong case for why it’s important we should know.”
— Dana Sawyer, professor of religion and philosophy at the Maine College of Art and author of Aldous

“A clear, accurate, comprehensive, and enjoyable exploration of a civilization that many know only through clichés. This may be Gary Lachman’s best book yet.”
— Richard Smoley, author of A Theology of Love

"With the end of the USSR; interest in esoteric and non-orthodox spirituality can be expressed openly; and is found at all levels of intellectual and spiritual life. Writings of Silver Age writers published in Paris; or the USA are now being published in Russia. There is a strong interest in human potential techniques of meditation, yoga, and exploration of inner worlds. Garry Lachman has written a useful guide to these important intellectual currents; which also impact Russian stratigraphic policy – currents which merit being better known."
— Professor Rene Wadlow, president of the Association of World Citizens