The Ridiculously Simple Guide to Google Pixel Slate and Pixelbook: A Practical Guide to Getting Started with Chromebooks and Tablets Running Chrome OS (Paperback) 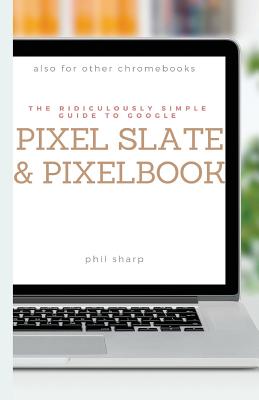 In 2011, Google disrupted the computer industry when it introduced the Chromebook. The lightweight computers with small price tags were the perfect solution for schools already using Google's suite of free cloud-based tools (Docs, Sheets, Slides, etc).

To the average professional, Chromebooks have been more of a novelty best suited for casual use. In 2013, Google tried to change this with the Chromebook Pixel--it's first higher end Chromebook. While most saw it as a worthy first effort, it was not largely viewed as ready for primetime.

Google discontinued the Chromebook Pixel in 2017 and announced its successor in October of 2017: The Pixelbook. Everything about the successor proved that Google had learned from previous generation Chromebooks and was ready to seriously compete with the Windows Surface and Macbook.

The hardware alone matched high-end Mac and Windows computers, but the software is where the Pixelbook really shines. In addition to Google Assistant, a Siri-like tool for productivity, the computer also is amongst the first Chromebooks to be able to run Android apps--combined with a convertible touchscreen, this means you can leave your tablet at home. For a better comparison of how the computer ranks against Windows and Mac, see Appendix A.

In 2018, Google was at it again. This time their interest had shifted from hybrid laptop / tablet to full on tablet with the Google Pixel Slate. It seemed like a direct response to what Google sees as their biggest threat: the iPad and Microsoft Surface.

If you've used any computer then both the Pixelbook and Slate will be easy enough to use as soon as you open it up for the first time. If you really want to take advantage of all the features and be as productive as possible, then this guide will help. Almost everything in this book will also apply to other Chromebooks.