The Real Watergate Scandal: Collusion, Conspiracy, and the Plot That Brought Nixon Down (Paperback) 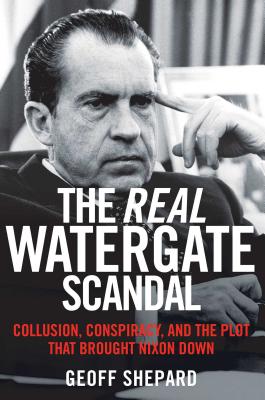 *Inspiration for the Major Off-Broadway Show, Trial on the Potomac.*

“It’s the biggest Watergate bombshell to hit since the Nixon tapes in 1973—with implications at once historic and relevant today.” —JAMES ROSEN, national bestselling author and legendary journalist

THESE JUDGES AND PROSECUTORS WERE DETERMINED TO GET NIXON "AT ALL COSTS."

“The system worked"—Carl Bernstein’s famous assessment of Watergate—turns out to be completely wrong. Powerful new evidence reveals that in the prosecution of the most consequential scandal in American history, virtually nothing in the justice system worked as it should.

The roles of heroes and villains in Watergate were assigned before Marine One carried Richard Nixon into exile on August 9, 1974. But Geoff Shepard’s patient and persistent research has uncovered shocking violations of ethical and legal standards by the "good guys”—including Judge John Sirica, Archibald Cox, and Leon Jaworski.

The Watergate prosecutors’ own files reveal their collusion with the federal judges who tried their cases and heard their appeals—professional misconduct so extensive that the pretense of a fair trial is now impossible to maintain.

Shepard documents that the Watergate Special Prosecution Force was an avenging army drawn from the ranks of Nixon’s most ardent partisan foes. They had the good fortune to work with judges who shared their animus or who quickly developed a taste for the media adulation showered on those who lent their power to the anti-Nixon cause.

In the end, Nixon’s fall was the result of the “smoking gun” tape recording in which he appeared to order a cover-up of the Watergate burglary. Yet in a stunning revision of the historical record, Shepard shows that that conversation, which he himself was the first to transcribe, was taken out of context and completely misunderstood—an interpretation with which Nixon’s nemesis John Dean concurs.

Crimes were committed, and an attempt was made to cover them up. But by trampling on the defendants’ right to due process, the Watergate prosecutors and judges denied the American people the assurance that justice was done and destroyed the historical reputation of an exceptionally accomplished president and administration. This book will challenge everything you think you know about the Watergate scandal.

GEOFF SHEPARD joined the Nixon administration as a White House Fellow directly out of Harvard Law School and became a senior member of the Domestic Council staff. Later, as Deputy Defense Counsel, he had a front-row seat for the political drama that toppled a president and sent his closest aids to prison.