Libraries amid Protest: Books, Organizing, and Global Activism (Studies in Print Culture and the History of the Book) (Paperback) 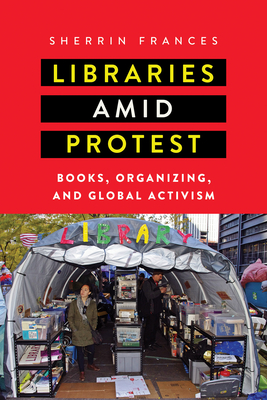 In September 2011, Occupy Wall Street activists took over New York's Zuccotti Park. Within a matter of weeks, the encampment had become a tiny model of a robust city, with its own kitchen, first aid station, childcare services—and a library of several thousand physical books. Since that time, social movements around the world, from Nuit Debout in Paris to Gezi Park in Istanbul, have built temporary libraries alongside their protests. While these libraries typically last only a few weeks at a time and all have ultimately been dismantled or destroyed, each has managed to collect, catalog, and circulate books, serving a need not being met elsewhere.

Libraries amid Protest unpacks how these protest libraries—labor-intensive, temporary installations in parks and city squares, poorly protected from the weather, at odds with security forces—continue to arise. In telling the stories of these surprising and inspiring spaces through interviews and other research, Sherrin Frances confronts the complex history of American public libraries. She argues that protest libraries function as the spaces of opportunity and resistance promised, but not delivered, by American public libraries.

"Libraries amid Protest tells an important story about the physical, intellectual, and emotional heft of the collections of books that sprang into existence at sites of resistance during the 2010s. It presents a new perspective on the multilayered activities that make up protest movements and asks us to broaden our understanding of the symbolic and material significance of libraries."—Cheryl Knott, author of Not Free, Not for All: Public Libraries in the Age of Jim Crow

"I know of no other study that provides such a crucial historical chronicle about book culture within Occupy Wall Street and the movement of the squares. It's almost as if the author pried open a previously inaccessible archive of dissident knowledge and invited us inside."—Gregory Sholette, author of Delirium and Resistance: Activist Art and the Crisis of Capitalism

"Emerging amid defunded and privatized public resources and public spaces, protest libraries provide glimpses of another world that they help make possible. Libraries amid Protest: Books, Organizing, and Global Activism provides a valuable glimpse of these temporary but extraordinarily memorable libraries."—Library Quarterly