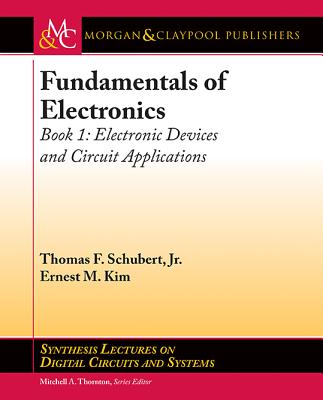 This book, Electronic Devices and Circuit Application, is the first of four books of a larger work, Fundamentals of Electronics. It is comprised of four chapters describing the basic operation of each of the four fundamental building blocks of modern electronics: operational amplifiers, semiconductor diodes, bipolar junction transistors, and field effect transistors. Attention is focused on the reader obtaining a clear understanding of each of the devices when it is operated in equilibrium. Ideas fundamental to the study of electronic circuits are also developed in the book at a basic level to lessen the possibility of misunderstandings at a higher level. The difference between linear and non-linear operation is explored through the use of a variety of circuit examples including amplifiers constructed with operational amplifiers as the fundamental component and elementary digital logic gates constructed with various transistor types. Fundamentals of Electronics has been designed primarily for use in an upper division course in electronics for electrical engineering students. Typically such a course spans a full academic years consisting of two semesters or three quarters. As such, Electronic Devices and Circuit Applications, and the following two books, Amplifiers: Analysis and Design and Active Filters and Amplifier Frequency Response, form an appropriate body of material for such a course. Secondary applications include the use in a one-semester electronics course for engineers or as a reference for practicing engineers.

Thomas Schubert received BS, MS, and PhD degrees in Electrical Engineering from the University of California at Irvine (UCI). He was a member of the first engineering graduating class and the first triple-degree recipient in engineering at UCI. His doctoral work discussed the propagation of polarized light in anisotropic media. Dr. Schubert arrived at the University of San Diego in August, 1987 as one of the two founding faculty of its new Engineering Program. From 1997-2003, he led the Department as Chairman, a position that became Director of Engineering Programs during his leadership tenure. Prior to coming to USD, he was at the Space and Communications Division of Hughes Aircraft Company, the University of Portland, and Portland State University. He is a Registered Professional Engineer in the State of Oregon. In 2012, Dr. Schubert was awarded the Robert G. Quinn Award by the American Society of Engineering Education "in recognition of outstanding contributions in providing and promoting excellence in engineering experimentation and laboratory instruction."