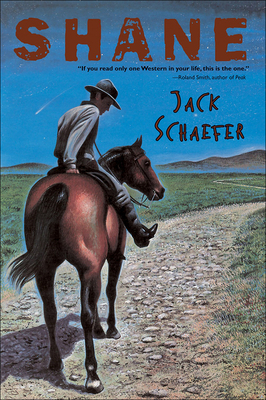 "I had lain in my bed thinking of our visitor out in the bunk in the barn. It scarce seemed possible that he was the same man I had first seen, stern and chilling in his dark solitude, riding up our road. Something in father, something not of words or of actions but of the essential substance of the human spirit, had reached out and spoken to him and he had replied to it and had unlocked a part of himself to us. He was far off and unapproachable at times even when he was right there with you." The Starrett family's life forever changes when a man named Shane rides out of the great glowing West and up to their farm in 1889. Young Bob Starrett is entranced by this stoic stranger who brings a new energy to his family. Shane stays on as a farmhand, but his past remains a mystery. Many folks in their small Wyoming valley are suspicious of Shane, and make it known that he is not welcome. But dangerous as Shane may seem, he is a staunch friend to the Starretts and when a powerful neighboring rancher tries to drive them out of their homestead, Shane becomes entangled in the deadly feud. This classic Western, originally published in 1949, is a profoundly moving story of the influence of a singular character on one boy's life.

Jack Schaefer (1907-1991) was born in Cleveland, Ohio, and studied at Oberlin College and Columbia University. "Shane, " his first piece of fiction, began as a short story. Mr. Schaefer went on to write many other stories and novels set in the West, earning a devoted following of readers that continues to grow.