Right Side of History: 100 Years of LGBTQI Activism (Paperback) 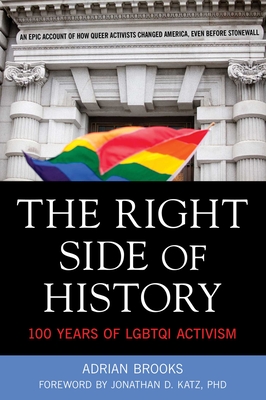 Before, During, and After Stonewall: 100 Years of Heroes and History

The Right Side of History tells the 100-year history of queer activism in a series of revealing close-ups, first-person accounts, and intimate snapshots of LGBT pioneers and radicals. This diverse cast stretches from the Edwardian period to today, including first-person accounts of the key protest that is at the heart of the 2015 movie Stonewall.

The book shows how LGBT folk have always been in the forefront of progressive social evolution in the United States. It references heroes like Abraham Lincoln, Eleanor Roosevelt, Bayard Rustin, Harvey Milk, and Edie Windsor. Equally, the book honors names that aren't in history books, from participants in the Names Project, a national phenomenon memorializing 94,000 AIDS victims, to underground artists and writers.

Adrian Brooks is an American writer and activist who's been the vanguard of progressive political, spiritual, and social movements since the 1960s. An international traveler, poet, performer, playwright, painter, and designer, he is also a novelist and nonfiction writer. Born in Philadelphia, Brooks was raised Quaker. After graduating Episcopal Academy in 1966 as an early hippie and anti-war protester, he attended the international Friends World Institute -- a radical Quaker school intent on its students becoming nonviolent "agents of social change." In 1968 he volunteered for Martin Luther King in Washington, D.C. Following Dr. King's assassination, Brooks did field work in Mexico and East Africa before attending Woodstock in 1969, then went to India with the Friends World Institute. In the early 70s, he was active in New York's then radical SOHO Movement, then moved West where he became a prominent as one of the first gay liberation poets and as the scriptwriter and star performer of the legendary San Francisco "Angels of Light," an offshoot of the Cockettes. Brooks remains devoted to good works and activism to this day. He supports orphans and assists education in rural India and contributes to the Huffington Post as well as Lambda Literary. He lives in San Francisco.Jonathan N. Katz is an independent scholar and historian of lesbian, gay, bisexual, transgender, and heterosexual American history. He is also a visual artist. His historical work has focused on same-sex attraction and changes in the social construction of sexuality and intimate relationships over time. His works stress that the categories with which we name, describe, define, and understand human sexuality are historically and culturally specific, along with the social organization of sexual activity, desire, relationships, and sexual identities. In his work, language is studied as one important tool that human beings use to construct different, historically specific sexualities and sex/gender systems. He lives in New York.

"Written in straightforward and often bold language, The Right Side of History brings fresh concepts to a polarizing topic. Same-sex marriage has been approved, and demands for LBGTQI social reform have increased worldwide, but general understanding has lagged. This compilation will help. For those in the LBGTQI community, Brooks furnishes heritage, heroes, and a genuine hope for a better future." --VOYA Magazine, October 2015

"The Right Side of History is not an original work of historical scholarship. The essays, when they aren't first-person pieces or interviews, rely on secondary sources for most of their historical claims. However, as I was reading it I thought of myself as a twelve-year-old, and how I likely would have benefited enormously from having a copy of The Right Side pressed into my hands as a birthday or Christmas gift. I was the sort of child who voraciously read young peoples' biographical sketches of inspiring women of history (some of whom I now know were decidedly queer). This collection would have helped me see possibilities for myself in a similar way as those women-of-history collections did -- helped me find language and historical context for longings I was just beginning to form. I suggest you consider this book for the queer, questioning, and just plain historically interested teenagers in your life; it's never too early to start peering through the windows of the past and considering how and where you might fit yourself." --thefeministlibrarian.com

"The Right Side of History's fundamental premise: Queer activism is an act of patriotism, and radical Queer activists are, and have always been, central to the struggle for a more perfect union. To read this book is to join our Queer ancestors as they dance, riot, write, organize, sew, sashay, and howl their way through American history." -Katie Gilmartin, author of Blackmail, My Love