The Elephant Whisperer (Young Readers Adaptation): My Life with the Herd in the African Wild (Hardcover) 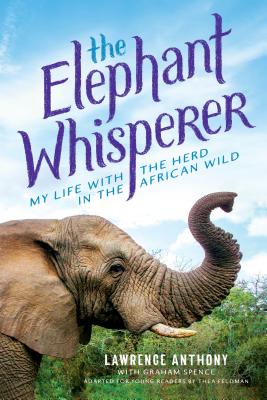 When Lawrence Anthony was asked to accept a rogue herd of elephants in his reserve in South Africa, it was the last chance for these elephants. If Anthony didn’t take them, they would be shot. But he had no experience with elephants at all. What was he to do?

Take them on, of course!

What follows is an exciting and heartwarming series of adventures, in which Anthony learns about elephants and becomes part of their family. Full of both triumph and tragedy, The Elephant Whisperer, is a fascinating and unforgettable account of living with the majestic elephant.

Lawrence Anthony (1950-2012) founded the Thula Thula wildlife reserve in Zululand, South Africa; launched The Lawrence Anthony Foundation; and received the UN's Earth Day award for his efforts to save the animals of the Baghdad Zoo. With Graham Spence, he is the author of Babylon's Ark: The Incredible Wartime Rescue of the Baghdad Zoo, The Elephant Whisperer: My Life with the Herd in the African Wild, and The Last Rhinos: My Battle to Save One of the World's Greatest Creatures.

GRAHAM SPENCE is a journalist and editor. Originally from South Africa, he lives in England. Together he and Lawrence Anthony wrote Babylon's Ark: the Incredible Wartime Rescue of the Baghdad Zoo.

Thea Feldman is a prolific author of leveled readers and picture books for children, including Suryia and Roscoe and Suryia Swims!, which she co-authored with Dr. Bhagavan Antle. She has also worked at the Wildlife Conservation Society where she researched and wrote about the animals in the Society's five urban wildlife parks in New York City. She is a former editorial director at Scholastic.

"Anthony's patient attempts to rehabilitate elephants—and the ensuing accounts of intelligence and emotional connection from these behemoths—are moving and fascinating." —Kirkus Reviews

"Anthony’s respect and compassion for all living things is evident throughout the narrative, and he pulls no punches when describing the wonders and the sorrows of life on a game reserve. A tender look at unlikely partnerships, and a wildlife adventure that reads like fiction." —Booklist

“In my thirty-five years of studying man/animal communication I have met only a few individuals who have the ability to enter into the metaphysical realm of the exotic animal. Lawrence Anthony has been there and back. His wonderfully written book The Elephant Whisperer is a true reflection of his ability to be one of the pachyderms.” —Ralph Helfer, author of Modoc

“Anthony has made a difference in the lives of many magnificent animals who otherwise would have been lost to the world. When you're feeling down and out and defeated and ready to give up, read this inspiring book and share it widely with others.” —Marc Bekoff, author of The Emotional Lives of Animals

“A lovingly written tale of close encounters, some beautiful and some frightening, with humans and nonhumans alike. Anthony's story of his trials and tribulations in preserving a herd of African elephants is a parable for the continent.” —Irene M. Pepperberg, author of Alex & Me

“An engaging and vividly personal account, The Elephant Whisperer invites you in, as confidant and confederate, from the first page and holds you rapt to the very last. A compelling reminder of the power and mysteries of the natural world, Thula Thula's elephants are lucky to have a friend like Lawrence Anthony.” —Amelia Thomas, author of The Zoo on the Road to Nablus

“The Elephant Whisperer is every bit as much a page-turner as a novel. … Anyone who remembers Born Free, a personal story of tamed East African lions, will hope this book, too, is destined for the screen.” —San Francisco Book Review