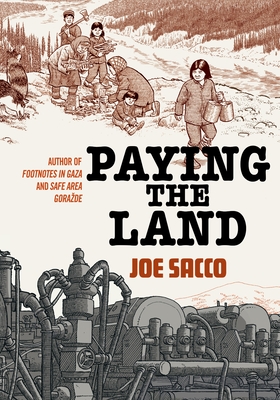 NAMED A BEST BOOK OF 2020 BY THE NEW YORK TIMES, THE GUARDIAN, THE BROOKLYN RAIL, THE GLOBE AND MAIL, POP MATTERS, COMICS BEAT, AND PUBLISHERS WEEKLY

From the “heir to R. Crumb and Art Spiegelman” (Economist), a masterful work of comics journalism about indigenous North America, resource extraction, and our debt to the natural world

The Dene have lived in the vast Mackenzie River Valley since time immemorial, by their account. To the Dene, the land owns them, not the other way around, and it is central to their livelihood and very way of being. But the subarctic Canadian Northwest Territories are home to valuable resources, including oil, gas, and diamonds. With mining came jobs and investment, but also road-building, pipelines, and toxic waste, which scarred the landscape, and alcohol, drugs, and debt, which deformed a way of life.

In Paying the Land, Joe Sacco travels the frozen North to reveal a people in conflict over the costs and benefits of development. The mining boom is only the latest assault on indigenous culture: Sacco recounts the shattering impact of a residential school system that aimed to “remove the Indian from the child”; the destructive process that drove the Dene from the bush into settlements and turned them into wage laborers; the government land claims stacked against the Dene Nation; and their uphill efforts to revive a wounded culture.

Against a vast and gorgeous landscape that dwarfs all human scale, Paying the Land lends an ear to trappers and chiefs, activists and priests, to tell a sweeping story about money, dependency, loss, and culture—recounted in stunning visual detail by one of the greatest cartoonists alive.

Joe Sacco is the author of Footnotes in Gaza, for which he received an Eisner Award and the Ridenhour Book Prize, as well as Palestine, Journalism, Safe Area Goražde (also an Eisner winner), and other books. His works have been translated into fourteen languages and his comics reporting has appeared in Details, The New York Times Magazine, Time, and Harpers. He lives in Portland, Oregon.

"A tour de force . . . luminous . . . Joe Sacco's large-scale panels teem with detail, visual and verbal . . . What begins as an exploration of the effects of fracking on Native lands sprawls into a haunted history of an entire civilization." —Ed Park, The New York Times Book Review

"Nuanced, highly sensitive journalism . . . Sacco’s measured artwork lets the Dene people speak for themselves, working in tandem with the historical and sociopolitical context that he deftly interweaves." —The Times Literary Supplement

"Anyone trying to wrap their heads around Thanksgiving myths about Pilgrims and Indians while also acknowledging their role in the occupation of lands stolen from indigenous people and the continued demand for fossil fuels and other resources that has brought us to a state of climate emergency needs to read this incredible work of comics journalism by a masterful researcher, storyteller, and artist." —Thi Bui, Marin Independent Journal

"It has been more than ten years since Joe Sacco, one of our greatest living graphic journalists, has produced a full-length work, and the wait has been worth it. . . . an immersive exploration that casts its net across a broad panoply of topics while still hewing to the granular details that make Sacco’s work so rewarding."—Minneapolis Star Tribune

"Magisterial . . . Paying the Land details a painful and tragic history, but in it Sacco finds images of hope for the Dene people and, by their example, for a world facing environmental collapse." —The Brooklyn Rail

"Such a powerful book." —Book Riot

"To say that Joe Sacco is the greatest practitioner of comics journalism working today is an understatement. . . . Paying the Land may well represent the greatest work he has ever done." —Comics Journal

"What are the Dene willing to sacrifice to sustain themselves? Deeply observed and masterfully drawn, Paying the Land brings light to dark corners of the world and to the human condition." —Orion Magazine

"Impassioned . . . Joe Sacco winds the most complex story of his career into a finely tuned narrative loop . . . An immediacy runs through the work." —The Literary Review of Canada

"Sacco goes where important conflicts rage . . . We are lucky he ventures into these spaces, because the insights he shares offer important lessons in understanding and compassion . . . Nuance and plurality dominate this narrative, and that's important because it's so often omitted from settler journalist coverage of Indigenous topics." —PopMatters

"Extraordinary . . . masterful . . . a startling depiction of an Indigenous people struggling to remain true to their traditions. Yet another triumph for Sacco." —Kirkus (starred review)

"An arresting exploration of a community on the brink. . . . meticulous . . . Sacco again proves himself a master of comics journalism." —Publishers Weekly (starred review)

"Sacco is a talent entirely unto himself, applying an exquisitely fine eye for detail to the urgent histories that define the world around us. . . . Now, Sacco brings that eye to the lives of the Dene people in the Canadian subarctic, getting the full picture as only he can." —Jonny Diamond, Literary Hub