Percussion Revolvers: A Guide to Their History, Performance, and Use (Paperback) 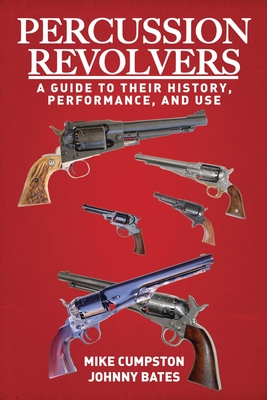 By Mike Cumpston, Johnny Bates
$14.95
Email or call for price.

A fascinating look at the history and development of the revolver.

Highly detailed and informative, Percussion Revolvers explores the advent, development, and use of precartridge revolvers during the middle years of the nineteenth century. The percussion revolver emerged in the 1830s and remained state-of-the-art until metallic cartridge revolvers came into common use in the mid-1870s. Through the use of modern replicas, shooting enthusiasts Mike Cumpston and Johnny Bates investigate the capacities and limitations of the original revolvers, providing insight into their accuracy, utility, and ballistic performance.

Replicas: The Good, the Bad, and the Awful
Early Revolvers, 1836–47: The Paterson and the Walker Colts
The Dragoons
Colt Revolvers of Midcentury: The Pocket and Navy Models
Holsters, Belts, and Sashes
The Later Years: The Last of the Colt Percussion Designs
A Hail of Lead: The Confederate LeMat

Bates and Cumpston discuss the development of the precartridge arms, placing them in their proper historic context. They also take a look at modern replicas, including detailed information on selection, maintenance, and shooting, while delving into both the positive and negative realities that can be encountered when using these firearms.

A valuable reference for students, fiction writers, and active shooters, Percussion Revolvers is an in-depth and comprehensive exploration of caplock handguns and their modern replicas.

Johnny Bates and Mike Cumpston live in central Texas and are lifelong shooting enthusiasts. Bates has many years of experience tuning and repairing original and replica revolvers for collectors and living history groups. Cumpston is a field editor for the highly respected GUNS magazine.