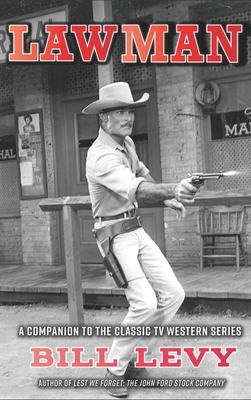 The Warner Bros. western series Lawman starring John Russell, Peter Brown, and Peggie Castle originally broadcast on ABC-TV airing 156 new episodes between September 1958 and June 1962. As played by steel-eyed John Russell, Dan Troop is a no-nonsense marshal who has little patience for outlaws or hypocrites, but will stand up for underdogs and outsiders. He also displays a warmer side with his mentoring of his young deputy (Peter Brown) and, beginning in the second season, in his relation- ship with Peggie Castle's beautiful Lily Merrill.

Lawman: A Companion to the Classic TV Western Series, the first book to focus fully on this show, re-familiarizes veteran viewers and introduces new fans to this exceptional television western and its three-dimensional leads. It features a Foreword by Will "Sugarfoot" Hutchins, a discussion of why Lawman stands out from other television westerns, a history of its creation, episode summary capsules, a "Recollections" chapter with recent interviews of Lawman alumni, and photos covering the show's four years.

Bill Levy is the author of John Ford: A Bio-Bibliography, Beyond the Beach: The Wit and Wisdom of Nevil Shute, and Lest We Forget: The John Ford Stock Company as well as numerous columns, articles, and stories on films, television, literature, and contemporary America. He resides in Sarasota, Florida.