The Truth About Tesla: The Myth of the Lone Genius in the History of Innovation (Paperback) 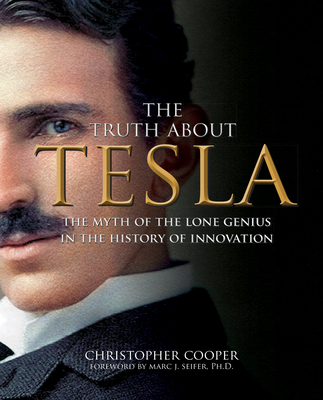 Everything you think you know about Nikola Tesla is wrong. The Truth About Tesla sets the record straight.

Nikola Tesla was one of the greatest electrical inventors who ever lived. For years, the engineering genius was relegated to relative obscurity, his contributions to humanity (we are told) obscured by a number of nineteenth-century inventors and industrialists who took credit for his work or stole his patents outright. In recent years, the historical record has been "corrected" and Tesla has been restored to his rightful place among historical luminaries like Thomas Edison, George Westinghouse, and Gugliemo Marconi.

Most biographies repeat the familiar account of Tesla's life, including his invention of alternating current, his falling out with Edison, how he lost billions in patent royalties to Westinghouse, and his fight to prove that Marconi stole 13 of his patents to "invent" radio. But, what really happened?

Consider this: Everything you think you know about Nikola Tesla is wrong. Newly uncovered information proves that the popular account of Tesla's life is itself very flawed. In The Truth About Tesla, Christopher Cooper sets out to prove that the conventional story not only oversimplifies history, it denies credit to some of the true inventors behind many of the groundbreaking technologies now attributed to Tesla and perpetuates a misunderstanding about the process of innovation itself.

Are you positive that Alexander Graham Bell invented the telephone? Are you sure the Wright Brothers were the first in flight? Think again! With a provocative foreword by Tesla biographer Marc. J. Seifer, The Truth About Tesla is one of the first books to set the record straight, tracing the origin of some of the greatest electrical inventions to a coterie of colorful characters that conventional history has all but forgotten.

Christopher Cooper is an acknowledged expert on energy and environmental policy. He holds a JD in energy law from Vermont Law School and a master's degree in communication from the University of Miami. Former Senior Fellow at the Institute for Energy and the Environment, Cooper has traveled the globe analyzing the most effective methods of harnessing the sun's energy—from solar towers in South Korea to massive photovoltaic arrays in Mongolia's Gobi Desert. He writes about the history of science and technology, with an emphasis on the adoption of electricity innovations. Among his other books are The Governance of Energy Megaprojects and Our Sun: Biography of a Star.

"His (Christopher Cooper) premise is that every scientific luminary, not just Newton, sees farther by standing on the shoulders of giants. Much of the text recounts not only the stories of Tesla's inventions, but also of the discoveries and developments of earlier researchers on whose work Tesla's is based. It tells, too, of some who tried to pirate Tesla's inventions and claim them as their own." — Mechanical Engineering

"Tesla is an enigmatic figure whose life and achievements appeal to historians, engineers, scientists, and many others, and this volume will touch them all in different ways. Everyone from new readers to Tesla historians are sure to find something of interest here." — Library Journal