On Politics: A History of Political Thought: From Herodotus to the Present (Paperback) 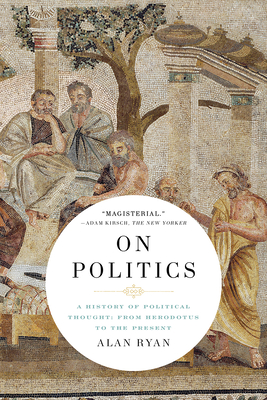 Finally in a one-volume paperback edition, On Politics is one of the most ambitious and hugely readable histories of political philosophy in nearly a century.

Praised widely upon hardcover publication, Alan Ryan’s “masterpiece” (David Ulin, Los Angeles Times) blends history and philosophy to examine three thousand years of political thought. Drawing on three decades of research, Ryan insightfully traces the origins of political philosophy from the ancient Greeks to the present and evokes the lives and minds of our greatest thinkers in a way that makes reading about them a “remarkable experience” (Jeremy Waldron, New York Review of Books). Whether writing about Plato or Augustine, Tocqueville or Jefferson, Ryan illuminates John Dewey’s dictum that the role of philosophy is less to see truth than to enhance life. With this “epic” (John Keane, Financial Times) tour de force, Ryan affirms his place as one of the most influential political philosophers of our time.

Alan Ryan, after decades at Princeton University, was warden of New College, University of Oxford, where he was a professor of political theory. He is the author of John Dewey and the High Tide of American Liberalism and Bertrand Russell: A Political Life, among other works.