The Joy of Mathematics: Marvels, Novelties, and Neglected Gems That Are Rarely Taught in Math Class (Paperback) 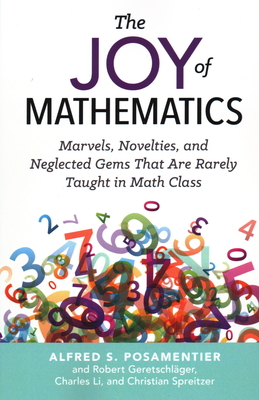 Wouldn't it be great if all school teachers (from kindergarten through high school) would share the joy of mathematics with their students, rather than focus only on the prescribed curriculum that will subsequently be tested?  This book reveals some of the wonders of mathematics that are often missing from classrooms. Here's your chance to catch up with the math gems you may have missed.

Using jargon-free language and many illustrations, the authors--all veteran math educators--explore five areas--arithmetic, algebra, geometry, probability, and the ways in which mathematics can reinforce common sense. Among other things, you'll learn "the rule of 72," which enables you to quickly determine how long it will take your bank account to double its value at a specific interest rate. Other handy techniques include an automatic algorithm for multiplying numbers mentally and a clever application that will allow you to convert from miles to kilometers (or the reverse) mentally. A delightful presentation of geometric novelties reveals relationships that could have made your study of geometry more fun and enlightening. In the area of probability there is a host of interesting examples: from the famous Monty-Hall problem to the counterintuitive probability of two people having the same birthday in a crowded room.

Finally, the authors demonstrate how math will make you a better thinker by improving your organizing abilities and providing useful and surprising solutions to common mathematics problems. You'll come away with an appreciation for math you never thought possible and a true appreciation for this "queen of the sciences."

Alfred S. Posamentier has published over sixty books in the area of mathematics and mathematics education, including, most recently, The Circle: A Mathematical Exploration beyond the Line (with Robert Geretschläger). After having been on the faculty of the City College of the City University of New York for forty years, where he was a professor of mathematics education and dean of the School of Education, he subsequently held the same positions at Mercy College, New York, for five years. He is currently executive director for internationalization and funded programs at Long Island University.

Robert Geretschläger is a mathematics teacher at Bundesrealgymnasium Keplerstrasse in Graz, Austria. He is the coauthor of The Circle (with Alfred S. Posamentier), Geometric Origami, and other works.

Charles Li is an Assistant Professor of Mathematics at Mercy College. He earned his Ph.D. in Mathematics from the CUNY Graduate Center, and his B.Eng. in Electrical Engineering from Cooper Union.

Christian Spreitzer teaches mathematics and physics at the University College of Teacher Education in Lower Austria.

“The Joy of Mathematics is aptly titled. The beauty, ingenuity, and mystery of this timeless discipline is laid out to captivate even a non-mathematician like myself. The history of major mathematical discoveries is noted as we are walked through the corridors of an unfolding digital universe, be it the science of probability, the intellectual beauty of Pascal’s triangle, or the intricacies of Kepler’s star shapes. The book should be a mandatory read for all who are mathematically literate and curious.”

“Too many young people leave school without ever having acquired an enjoyment of [mathematics] or recognition of the importance of mathematical understanding in everyday life, from our bank accounts to politicians’ use of statistics. This delightful book fills a vital role in making mathematics relevant, intelligible, and above all—fun! I recommend it unreservedly to pupils and teachers as a way of opening the door to joy in this key subject.”

“The Joy of Mathematics includes wonderful examples of often-overlooked gems in elementary mathematics. Even an expert can benefit a lot from it, but it is written in such a catchy style that everyone—layperson or expert—will enjoy each page.”

—Rudolf Taschner, professor at the Technical University of Vienna, Austria’s 2004 Scientist of the Year, and author of Game Changers

“A pleasant and fascinating excursion through the amusements, byways, curiosities, and diversions of mathematics. It even gets up to public-key cryptography and several unsolved problems. This is just the book to give to anyone who doesn’t like mathematics or who wonders, What is ‘recreational mathematics’?”