Science in Black and White: How Biology and Environment Shape Our Racial Divide (Hardcover) 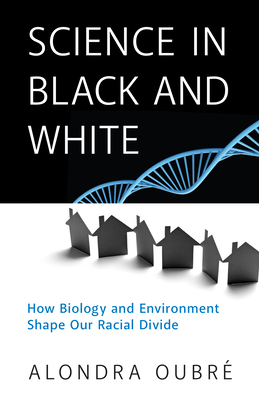 Racial groups differ in some of their social patterns, but the cause of those differences--nature versus nurture, or genetics versus environment-- remains fiercely debated. For the pro-nature camp-- sometimes aligned with white nationalism and eugenics, and often used to promote ideas of racial inferiority and superiority -- race-based biological determinism contributes significantly to the ethnic divide, especially the black/white gap in societal achievement. By contrast, pro-nurture supporters attribute ethnic variation in social outcomes primarily to environmental circumstances, ecological conditions, and personal experience.

In this thoroughly researched book, science writer Alondra Oubré examines emerging scientific discoveries that show how both biology and environment interact to influence IQ--intelligence performance--and social behaviors across continental populations, or human races. She presents compelling evidence for why environmental and certain non-DNA-related biological phenomena overall seem to best explain black/white disparities in a gamut of social behaviors, including family structure, parenting, educational attainment, and rates of violent crime. As she demonstrates, nature still matters, but the biology that impacts racial variance in social behaviors extends beyond genetics to include other processes--epigenetics, gene expression, and plasticity--all of which are profoundly affected by a wide array of environmental forces. The complex, synergistic interplay of these factors combined, rather than just genes or just environment, appears to account for black/white divergence in a gamut of social behaviors.

Alondra Oubré is a graduate of the joint doctoral program in medical anthropology at the University of California (UC) at Berkeley and the University of California at San Francisco School of Medicine, and holds a PhD in anthropology and medical anthropology, as well as an MA in anthropology from UC Berkeley. For the last twenty-five years, she has worked as a medical writer and regulatory affairs specialist in the medical device and pharmaceutical industries. Dr. Oubré's published works include essays on the nature-versus-nurture controversy over the ethnic achievement gap, medicinal plant research for pharmaceutical drug development, and various scientific topics for magazines and journals, such as Skeptic magazine, Psychiatric Times, and Scientia Salon. She has lectured on race-related topics at events hosted by organizations such as the American Anthropological Association, California Institute of Technology in conjunction with the Skeptic Society, University of Maryland at College Park, Human Behavior and Evolution Society, and various universities in the United States, Africa, and Asia. She is the author of two books, Race, Genes, and Ability: Rethinking Ethnic Differences (two volumes) and Instinct and Revelation: Reflections on the Origins of Numinous Perception.