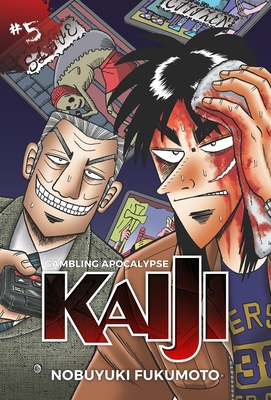 After surviving Tonegawa's dastardly schemes set outside of the hotel tower, Kaiji was let inside the building for what may be one last chance to pay off his debts. But while his last two tests were partially physical and emotional, this new game is a test of wills. E-Card is a simple card game but when played against someone who says he can read minds, it may be an impossible game to win at consistently Kaiji has gone too far now, so he'll literally put his body on the line as payback

Nobuyuki Fukomoto made his manga debut in 1980 and has penned more than one-hundred and fifty volumes over his illustrious career. In 1998 he was presented the Kodansha Manga Award's Comic of the Year for his work on Gambling Apocalypse: Kaiji. Known to incorporate both elements of gambling and finance in his works, Fukumoto's most memorable titles tend to focus on the consequences of Japan's economic culture. Kaiji was recognized by the publishing world for how it rendered a changing social landscape after Japan's economic bubble had burst. Outside of Kaiji, Fukumoto is best known for his other international best-sellers, which include: Akagi (Take Shobo), Gin and Kin (Futabasha) and Kurosawa: The Strongest Man (Shogakukan).