Exposing the Myths of Blackjack: A Unique Approach to Blackjack (Paperback) 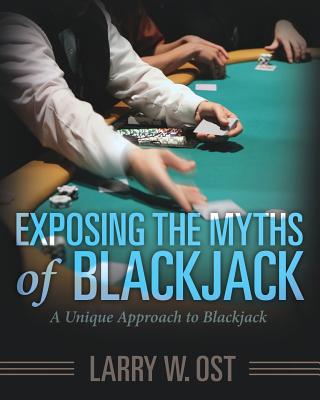 "Exposing the Myths of Blackjack" uses a statistical approach to investigate all possible player hands (first two cards) and dealer up cards for two strategies. The recommended player option for each is documented in detailed data tables and play cards that summarize the results. The Basic strategy is the commonly accepted one that recommends player options that will provide him/her with the maximum profit/minimum loss. The second strategy is the ROI Strategy that uses a risk averse technique to slightly alter some player recommendations, allowing players to retain most of their winnings while eliminating some recommendations that offer little return in exchange for additional wagers. All results are presented in terms of dollars and cents, a measure of merit that all readers will understand. This Return-On-Investment approach and the unique presentation of results provides the reader/player with an easy-to-understand approach to the game. This has been done for one deck, two decks and six decks, and for all of the commonly used player and casino rules for blackjack. Play cards for different scenarios are displayed side-by-side so the reader can easily identify differences. Commonly used, but questionable player recommendations, are identified as potential myths and discussed in detail. In addition to a final summary, several wagering techniques are discussed.

Larry grew up on a farm in North Dakota, where he learned the meaning of hard work and determination. After completing high school he attended Jamestown College, where he received a B. S. degree in mathematics, with a minor in physics. Later, he attended Kansas State University, where he received a Master's degree in mathematics, with a minor in statistics. After completing his formal education, he and his family moved to California in 1968, where he began his employment at a major aerospace company. He retired in 2008 and moved with his wife to their mountain home in the Sierra foothills.