A Sound Mind: How I Fell in Love With Classical Music (and Decided to Rewrite its Entire History) (Hardcover) 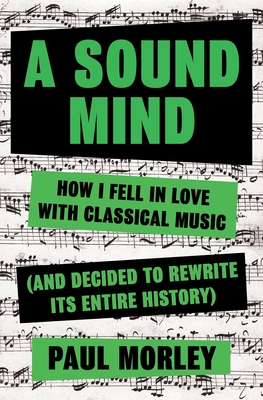 For readers of Mozart in the Jungle and Year of Wonder, a new history of and guide to classical music.

Paul Morley made his name as a journalist covering the rock and pop of the 1970s and 1980s. But as his career progressed, he found himself drawn toward developing technologies, streaming platforms, and, increasingly, the music from the past that streaming services now made available. Suddenly able to access every piece Mozart or Bach had ever written and to curate playlists that worked with these musicians' themes across different performers, composers, and eras, he began to understand classical music in a whole new way and to believe that it was music at its most dramatic and revealing.
In A Sound Mind, Morley takes readers along on his journey into the history and future of classical music. His descriptions, explanations, and guidance make this seemingly arcane genre more friendly to listeners and show the music's power, depth, and timeless beauty. In Morley's capable hands, the history of the classical genre is shown to be the history of all music, with these long-ago pieces influencing everyone from jazz greats to punk rockers and the pop musicians of today.

Paul Morley grew up in Stockport, Cheshire, and has worked as a music journalist, pop svengali and broadcaster. He is the author of a number of books on music – Ask: The Chatter of Pop, Words and Music: A History of Pop in the Shape of a City, Joy Division: Piece by Piece: Writing About Joy Division 1977–2007 and Joy Division: Fragments – as well as an acclaimed memoir of his early years, Nothing. Paul has written for a number of publications, including the New Statesman, the Sunday Telegraph, NME, the Observer and the Guardian.

"Morley is a bright writer, and most of his commentary on specific pieces and composers is sophisticated and insightful." - The New York Times Book Review

“A thoughtful work full of fresh observations and strong opinions. . . [Morley's] writing strikes just the right note: erudite but edgy, entertaining but enlightening. An excellent guide for anyone interested in expanding their musical horizons.” —Library Journal

“An intoxicating journey into classical music. . . [Morley] expertly probes classical composers' agitated minds and collective oeuvres. Adeptly framing observations of pop, rock, and classical music within the context of the industry, Morley also underscores extraordinary changes in our time, highlighting the rapid growth of technology and its impact on music. . . A rich resource for music lovers.” —Booklist

“Morley's expansive present-tense prose flows from the loosening of the superego, his id let out to play in a style that's at times neo-gonzo, at others like an inspired hybrid of Mik Cohn and the Julian Cope of Krautrocksampler. I hold him to be one of the great pop writers. You might even call him the Bowie of rock journalism.” —Barney Hoskyns, The Guardian on THE AGE OF BOWIE

“Morley remains a brilliant conductor – of music, of ideas, of inexplicable flashes of lightning. He knows the score.” —The Sunday Times

"If Morley’s book is a meta-playlist, it includes some fascinating tracks. Among the questions he asks and answers: Unlike classical compositions, why are pop bands more about the brand than the music? Is there a place for music critics now that there are algorithms that can tell you what to listen to next? Why is abstract art sometimes valued in the millions of dollars, when its contemporary--abstract music--is something you can’t own or monetize?" - New York Journal of Books