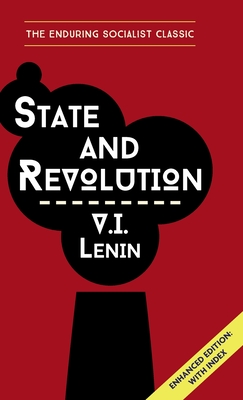 Echo Point Books & Media's enhanced edition of Lenin's State and Revolution is the only version that includes an index of the contents of this classic (for paperback edition with an index, search for ISBN 163561970X). Created from a combination of sophisticated proprietary software and editorial review, our unique (copyrighted) index is a valuable addition to this important work. As every experienced reader knows, an index is a helpful resource for more efficient, insightful reading, and a useful aid for research.

In 1917, in the midst of two revolutions, Vladimir Ilich Lenin fled Russia for fear of persecution by the government. While in exile, he began work on one of his most important works, State and Revolution, an attempt to resurrect the purity of Marx's and Engels's socialist teachings, which Lenin claimed were subsumed and weakened by reformists who reduced the "great revolutionaries" into "harmless icons." In State and Revolution, Lenin posits that the traditional role of the state in society is to maintain the control of the powerful, thus enabling the rich to exploit the poor. Because the ruling class will never willingly give up their political influence, social democracy-including parliamentary elections-is a false promise, and only results in a new crop of rich overlords lining up to "repress and crush the people." The sole way to bring true freedom and self-determination to all citizens, and throw off the "yoke of capitalism," is through Communist revolution-to "smash the state." As a result, the state would "wither away," and its bureaucrats would perform the will of the proletariat. This seminal work provides a practical application of socialist principles and it has greatly influenced theories of global capitalist development. Italian philosopher Lucio Colletti called State and Revolution "Lenin's greatest contribution to political theory."

To deepen your understanding of Lenin's arguments in State and Revolution, you may also wish to read his treatise on the relationship between capitalism and colonialism; Imperialism: The Highest Stage of Capitalism. Enhanced edition with index published by Echo Point Books (hardcover ISBN 1635617278; paperback ISBN 1635617197).