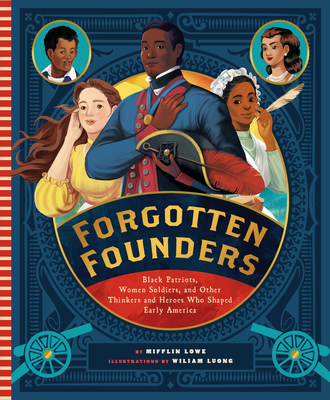 " T]he cause is just, and readers will come away with a firmer understanding that, as the introduction has it, the story of this country's founding is 'everyone's story.'"--Booklist

"This book will delight visual learners, history lovers, and trivia enthusiasts. It would also validate the diversity of the United States's heroes, encourage critical thinking, and inspire further research. A solid addition to any library or classroom."--School Library Journal

The founding of America was not accomplished by a handful of people; it required the heart, soul, and grit of an entire nation. Today, we rightfully honor the efforts of the Founding Fathers, but what about everyone else who sacrificed for the cause?

Introducing Forgotten Founders, the inspiring book of stories about the heroic women, African Americans, Native Americans, immigrants, and others who played pivotal roles in America's birth. Make no mistake: these were no historical footnotes. These were brave men and women without whom the war simply could never have been won and the new republic never begun.

Bestselling author, singer, songwriter, and musician Mifflin Lowe has had six books published, selling over 300,000 copies in four languages. His books include a children's poetry book, Beasts By The Bunches (Doubleday), and three humor books for adults: The Cheapskate's Handbook, I Hate Fun, and How To Be A Celebrity (Price/Stern/Sloan.) He has also performed his music for family audiences from New England to New Orleans, presenting works from his children's CDs: The King Who Forgot His Underpants, Cowboy Kareem, Wilton Wilberry's Magical Holiday Wishing Well, Cat Tales, and Beasts By The Bunches (Caedmon/Harper& Row). Recently, his animated film script, The Adventures of Cowboy Kareem, won the blue ribbon prize in the Sarasota Film Office TV/ME competition, beating out over 800 entrants from 28 states.