The Ghosts of Belfast (Deluxe Edition) (The Belfast Novels #1) (Paperback) 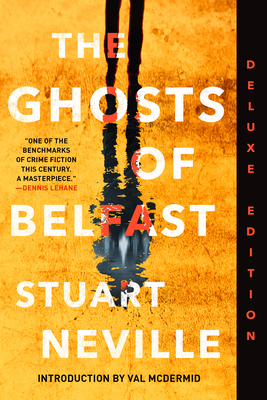 This is book number 1 in the The Belfast Novels series.

A New York Times Notable Book and Winner of The Los Angeles Times Book Prize, Neville's debut remains "a flat-out terror trip" (James Ellroy) and "one of the best Irish novels, in any genre" (John Connolly) is reissued in a deluxe edition.

Northern Ireland’s Troubles may be over, but peace has not erased the crimes of the past. Gerry Fegan, a former paramilitary killer, is haunted by the ghosts of the twelve people he slaughtered. Every night, at the point of losing his mind, he drowns their screams in drink. But it’s not enough. In order to appease the ghosts, Fegan is going to have to kill the men who gave him orders. From the greedy politicians to the corrupt security forces, the street thugs to the complacent bystanders who let it happen, all are called to account.

This masterpiece of both Irish literature and of crime fiction, now a modern classic, is presented here with an introduction by Val McDermid, a discussion guide for book clubs, and a behind-the-book peek at Stuart Neville’s creative process.

Stuart Neville, the “king of Belfast noir” (The Guardian), is the author of ten novels, including The House of Ashes. He has won the Los Angeles Times Book Prize and been shortlisted for the Edgar,
Macavity, Dilys, Barry, and Anthony Awards as well as the CWA Steel Dagger. He lives near Belfast.

Praise for The Ghosts of Belfast
WINNER OF THE LOS ANGELES TIMES BOOK PRIZE FOR BEST CRIME NOVEL
A NEW YORK TIMES NOTABLE BOOK
FINALIST FOR THE MACAVITY, BARRY, AND ANTHONY AWARDS

“One of the benchmarks of crime fiction this century. A masterpiece.”
—Dennis Lehane

“Not only one of the finest thriller debuts of the last ten years, but also one of the best Irish novels, in any genre, of recent times.”
—John Connolly

“Neville’s novel is a coldly lucid assessment of the fragility of the Irish peace . . . A rare example of legitimate noir fiction.”
—The New York Times Book Review

“Perfect for summer—especially if you want to be reminded of what a blessing it is to live in relatively peaceful times.”
—Slate

“The Ghosts of Belfast is a smart and atmospheric thriller about the many causes served and corrupt pockets lined courtesy of sectarian hatred.”
—Maureen Corrigan, NPR.org

“Stuart Neville's tightly wound, emotionally resonant account of an ex-IRA hit man's struggle to conquer his past, displays an acute understanding of the true state of Northern Ireland, still under the thumb of decades of violence and terrorism.”
—Los Angeles Times

“Both a fine novel and a gripping thriller: truly this is a magnificent debut.”
—Ruth Dudley Edwards, author of Ten Lords-A-Leaping

“Stuart Neville goes to the heart of the perversity of paramilitarism.”
—Sean O’Callaghan, author of The Informer

“An astonishing debut. Brilliantly conceived, masterfully written, Stuart Neville’s The Ghosts of Belfast is both a heart-pounding thriller and a stunning examination of responsibility and revenge. He is going to be a major new voice in suspense fiction.”
—Jeff Abbott

“Stuart Neville will go far as a writer . . . It’s a wonderful novel, brave and fierce and true to its place and time. I sincerely hope it sells a million copies.”
—Crimespree

“Stuart Neville delivers an inspired, gritty view of how violence’s aftermath lasts for years and the toll it takes on each person involved. The Ghosts of Belfast also insightfully delves into Irish politics, the uneasy truce in Northern Ireland, redemption, guilt and responsibility.”
—Oline Cogdill, Mystery Scene

“Stuart Neville belongs to a younger generation of writers for whom the region's darkest years are history—but that history endures, as his first novel, The Ghosts of Belfast, shockingly demonstrates . . . In scene after gruesome scene, Neville attempts to persuade us that this time around, with this repentant murderer, the killing is different.”
—The Washington Post

“Neville’s debut is as unrelenting as Fegan’s ghosts, pulling no punches as it describes the brutality of Ireland’s 'troubles' and the crime that has followed, as violent men find new outlets for their skills. Sharp prose places readers in this pitiless place and holds them there. Harsh and unrelenting crime fiction, masterfully done.”
—Kirkus Reviews, Starred Review

“A stunning debut . . . This is not only an action-packed, visceral thriller but also an insightful insider’s glimpse into the complex political machinations and networks that maintain the uneasy truce in Northern Ireland.”
—Publishers Weekly, Starred Review

“In this well-crafted and intriguing series debut, Neville evokes the terrors of living in Belfast during 'the Troubles' and manages to makes Fegan, a murderer many times over, a sympathetic character…The buzz around this novel is well deserved and readers will be anticipating the next book in the series.”
—Library Journal, Starred Review

“Explosive and absorbing . . . The Ghosts of Belfast is an intense meditation on obligation, necessity, and war. Within Stuart Neville’s rich vocabulary, complacency is not a word to be found.”
—Sacramento News and Review

“The Ghosts of Belfast is a tale of revenge and reconciliation shrouded in a bloody original crime thriller . . . Fierce dialogue and the stark political realities of a Northern Ireland recovering from the ‘Troubles’ drive this novel. It's not difficult to read this brilliant book as an allegory for a brutal past that must be confronted so the present ‘can be clean.’”
—Milwaukee Journal Sentinel

“In his stunning debut, Stuart Neville delivers an inspired, gritty view of how violence's aftermath lasts for years and the toll it takes on each person involved. The Ghosts of Belfast also insightfully delves into Irish politics, the uneasy truce in Northern Ireland, redemption, guilt and responsibility . . . Neville delivers an emotionally packed novel that is both empathetic and savage. Neville never makes Gerry's visions of ghosts seem trite or silly. Like his countryman, John Connolly, Neville keeps the supernatural aspects believable . . . The Ghosts of Belfast is a haunting debut.”
—South Florida Sun-Sentinel

“If you by chance have never read Stuart Neville’s Belfast Trilogy, it’s time to redeem yourself.”
—Grift Magazine

“A brilliant thriller: unbearably tense, stomach churningly frightening . . . A future classic of its time.”
—The Observer

“Stuart Neville's blistering debut thriller is a walk on the wild side of post-conflict Northern Ireland that brilliantly exposes the suffering still lurking beneath the surface of reconciliation and the hypocrisies that sustain the peace.”
—Metro (UK)

“Neville has the talent to believably blend the tropes of the crime novel and those of a horror, in the process creating a page-turning thriller akin to a collaboration between John Connolly and Stephen King.”
—Sunday Independent (Ireland)

“[Neville] is . . . uniquely, tragically equipped to be able to think through complex issues of justice and mercy.”
—Irish Times