Among Tigers: Fighting to Bring Back Asia's Big Cats (Hardcover) 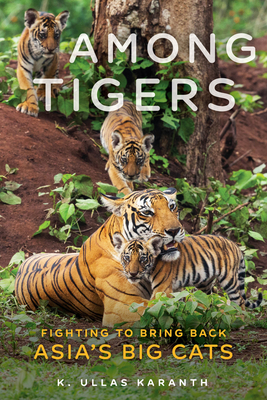 “A splendid and important testament to what it takes to save this storied, apex predator in a world swarming with humans and awash in greed and needs. This book is essential reading for everyone who wants to see the tiger survive.” —Sy Montgomery, author of Spell of the Tiger and The Soul of an Octopus

Today ten times more tigers live in captivity than survive in the wild.

For over five decades, K. Ullas Karanth has been engaged in the struggle to bring wild tigers back from the brink in India, their last remaining wild stronghold. He tells the story of the tiger itself—its incredible biology, its critical role in shaping natural ecosystems of Asia, and the unique place it holds in our collective imagination.

Among Tigers is the story of how we wound up with fewer than 5,000 wild tigers, and how, with focused efforts, we can grow that population ten times or more in a few decades. In doing so, we would bring not only the world’s largest and most beloved feline back from the brink, but also save countless other species that share the tigers habitats from the freezing forests of Siberia to the tropics of India.

Karanth shares the adventurous real-life story of his quest to save a species and, along the way, the hopeful realization that tiger conservation is a battle that can be won.

Ultimately, the book is a roadmap showing us how to not only to save the greatest of great cats, but to bring it roaring back at numbers never before seen in our lifetimes.

K. Ullas Karanth is now emeritus scientist at the Centre for Wildlife Studies in Bangalore. Previously he led one of the longest-running (1986–2017) tiger conservation programs in the world for the Wildlife Conservation Society. Along the way has conducted cutting-edge research, which gained crucial new knowledge for bringing tigers back. Karanth has also engaged deeply with researchers, wildlife managers, social leaders, and local communities that live next to tigers. His efforts have effectively stopped poachers, mitigated human-tiger conflicts, and helped forest families to happily resettle away from tiger habitats. He lives in India.

“Ullas Karanth’s book Among Tigers is a riveting and timely account with the data, analyses, and insights that are essential if this beautiful cat, beloved by so many, is to survive in the wild. Masterfully written, Among Tigers is a conservation classic.” —George B. Schaller, senior conservationist, Wildlife Conservation Society, and author of Into Wild Mongolia

“This book is a must read for anyone interested in the science and conservation of wild tigers in the last five decades. It also highlights ignorance of the new forest bureaucracies that now rule the land of the tiger without any vision whatsoever.” —Valmik Thapar, author of Tiger Fire and Saving Wild India

“Ullas Karanth describes his evolution from scientist to conservationist, and fills one with hope that science can show a way through the thicket of competing political and commercial interests, and ultimately allow a way for wild tigers and people to co-exist.” —John Robinson, Joan L. Tweedy Chair in Conservation Strategy, Wildlife Conservation Society

“Drawn to nature since childhood, Ullas Karanth became the first person in India to radio-track its fabled tigers. He continued studying them for decades, and his book takes us with him down tropical forest paths to gain insights about Asia’s most powerful carnivore—often at startlingly close range. Yet what distinguishes Among Tigers is the way it also brings readers deep into the realities of conservation in a crowded, rapidly developing country. That Karanth’s resolve to improve tiger protection never wavered despite interference from power-hungry politicians and entrenched bureaucrats is important. Why? Because it a good part of the reason why India, which held had fewer than 300 tigers in the 1970s, now hosts around 3,000 of the estimated 5,000 left on Earth.” —Douglas Chadwick, author of Four-Fifths a Grizzly and The Wolverine Way

“Karanth takes us on a roller coaster ride through the jungles of South India, alternatingly describing his detailed field work and the life of tigers versus the messy world of tiger politics—regionally, nationally, and internationally. Mincing no words, Karanth makes the case for science-based conservation of tigers and the need for hard, grind-it-out field work, but also explains why science is not enough. To save tigers, Karanth demonstrates through his own efforts the need for politically astute and stubbornly tenancious tiger ‘wallahs,’ the people who fight to save the last realms of the tiger. A great read and a great story by a person who dedicated his life to the tigers of India.” —Dale Miquelle, coordinator, Wildlife Conservation Society Tiger Program

“Ullas Karanth is a tiger conservation hero, and his story is shocking, riveting, devastating—and in the end, hopeful. Among Tigers is a splendid and important testament to what it takes to save this storied, apex predator in a world swarming with humans and awash in greed and needs. This book is essential reading for everyone who wants to see the tiger survive.” —Sy Montgomery, author of Spell of the Tiger and The Soul of an Octopus


“Among Tigers is a unique book by a unique author. K. Ullas Karanth has devoted his life to the understanding and protection of the endangered tigers of Asia. In this utterly fascinating and moving account, he describes decades of commitment, scientific insight, personal bravery, and complicated dealings with communities, governments, brigands, and rogues, all in the quest for living in harmony with nature despite powerful forces of human destruction (and self-destruction). For all who care about nature and humanity’s place in a safe world, this book is fascinating and important reading.” —Jeffrey D. Sachs, author of The End of Poverty and The Prize of Civilization

“Karanth takes us on a roller coaster ride through the jungles of South India, alternatingly describing his detailed field work and the life of tigers versus the messy world of tiger politics—regionally, nationally, and internationally. Mincing no words, Karanth makes the case for science-based conservation of tigers and the need for hard, grind-it-out field work, but also explains why science is not enough. To save tigers, Karanth demonstrates through his own efforts the need for politically astute and stubbornly tenancious tiger ‘wallahs,’ the people who fight to save the last realms of the tiger. A great read and a great story by a person who dedicated his life to the tigers of India.” —Dale Miquelle, coordinator, Wildlife Conservation Society Tiger Program


“In this remarkable story Ullas Karanth shows how sound science and a deep compassion for wildlife and people can win an enduring place for tigers in the face of the gravest political obstacles and modernization.”—David Western, author of We Alone: How Humans Have Conquered the Planet and Can Also Save It

“There are many books about tigers, but none like this book. In Among Tigers, Ullas Karanth walks the reader through his unique, lived experience—a fifty-year personal journey from reluctant engineer to farmer, biologist, and finally to one of the world’s foremost tiger conservationists. Karanth juxtaposes the beauty of the wilderness and excitement of studying tigers with the real life logistical and political difficulties of working with India’s most famous big cat. Writing with rare honesty, he pulls back the curtain on the messy realities of the politics of tiger conservation in India. Astonishingly, despite India’s 1.3 billion human population, Karanth’s singular, lucid account leaves us convinced there is hope for the tiger’s future. This book is a must read for tiger fans.” —Mel Sunquist, author of Tiger Moon

“Among Tigers is one of the most engaging pieces of nonfiction I have ever read. Good science and entertaining writing seldom come from the same person, but author Ullas Karanth is an exception, fascinating the reader with dramatic scenes that range from adventures capturing and filming wild tigers in Asian jungles, to legal battles in Indian courtrooms, to political influence and intrigue in the halls of government. But reader beware that as you proceed through this page-turner you will be exposed to unequaled, first-hand knowledge of tiger biology, conservation, and future prospects.” —James D. Nichols, USGS Eastern Ecological Science Center

“This unique and vividly written book by one of world’s finest wildlife biologists is a compelling read. Among Tigers is many things at once—a fascinating personal memoir from the man who spearheaded change in protecting tigers in Asia, particularly India; a wonderfully clear account of major issues in top-level conservation science; and a humane account of the wild tiger’s precarious position at this moment of crisis for nature everywhere. Karanth makes a compelling case that humanity needs to save tigers for its own good.” —Ruth Padel, author of Tigers in Red Weather

“This is a tale of high adventure. Capturing and then tracking tigers raises one’s heart rate like nothing else. On foot in the forest, their presence is terrifying. Yet some of this book takes place in the corridors of power. There, politicians can help or pose more of a threat than a poacher. Karanth is at home in both these worlds. He brings science to tiger conservation, confronts the managers and politicians alike, and never forgets the needs of the local people who must live with tigers.” —Stuart L. Pimm, president, Saving Nature; author of The Balance of Nature?

“One of India’s ‘midnights children’ who grew up in tiger country to became India’s most acclaimed tiger ecologist, Ullas Karanth exquisitely captures the grandeur of the apex predator as it elegantly glides through the forest, as well as the abased political conflicts and struggles that have so often undermined this most magnificent species’ salvation. With acute insights and elegant prose, Dr. Karanth’s private experiences dealing with the dichotomy between conservation theory and conservation practice, and public debates ranging from landscape protection to tiger tourism, render Among Tigers to be a must-read for everyone who cares deeply about the future of the world’s most popular animal.” —Dr. Thomas S. Kaplan, cofounder of Panthera

“Ullas Karanth, world-renowned tiger expert, lays bare the hardscrabble struggles through his single-minded pursuit to save a majestic species. From the science of tiger tracking to the dirty politics of corrupt bureaucrats, you will almost feel like you are Among Tigers in the Nagarhole jungle. Karanth has no patience for urban idealistic tiger-lovers or over-funded, underperforming faraway organizations. Based on his decades of fighting for tigers, his prescriptions for conservation stem from the reality on the ground.” —Ruth DeFries, author of What Would Nature Do?