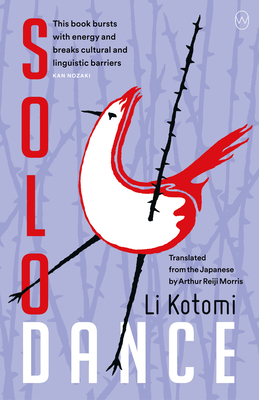 Cho Norie, twenty-seven and originally from Taiwan, is working an office job in Tokyo. While her colleagues worry about the economy, life-insurance policies, marriage, and children, she is forced to keep her unconventional life hidden--including her sexuality and the violent attack that prompted her move to Japan. There is also her unusual fascination with death: she knows from personal experience how devastating death can be, but for her it is also creative fuel. Solo Dance depicts the painful coming of age of a gay person in Taiwan and corporate Japan. This striking debut is an intimate and powerful account of a search for hope after trauma.

Li Kotomi is a bilingual Japanese-Chinese writer, translator, and interpreter. She was born in Taiwan in 1989 and moved to Japan in 2013. In 2017, she won the 60th Gunzō New Writers' Prize for Excellence for her first novel, Solo Dance, written in Japanese, her second language. Since then she has been nominated for numerous prizes in Japan, and in 2021 she received the Minister of Education Award for Fine Arts, a prize for upcoming writers. Her range of activities spans multiple countries, regions, and languages, and her translation expertise ranges from general business to literary arts, tourism, manga, games, and contracts. Arthur Reiji Morris is a translator of Japanese literature, manga, and video games. Born in London, he graduated from the University of Leeds in 2015, before moving to Tokyo. When he's not translating, Arthur enjoys writing music and practicing Japanese calligraphy. He returned to the UK in 2019, and is now based in London.