The Mirror and the Palette: Rebellion, Revolution, and Resilience: Five Hundred Years of Women's Self Portraits (Hardcover) 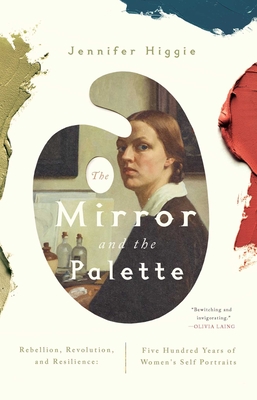 A dazzlingly original and ambitious book on the history of female self-portraiture by one of today's most well-respected art critics.

Her story weaves in and out of time and place. She's Frida Kahlo, Loïs Mailou Jones and Amrita Sher-Gil en route to Mexico City, Paris or Bombay. She's Suzanne Valadon and Gwen John, craving city lights, the sea and solitude; she's Artemisia Gentileschi striding through the streets of Naples and Paula Modersohn-Becker in Worpswede. She's haunting museums in her paint-stained dress, scrutinising how El Greco or Titian or Van Dyck or Cézanne solved the problems that she too is facing. She's railing against her corsets, her chaperones, her husband and her brothers; she's hammering on doors, dreaming in her bedroom, working day and night in her studio. Despite the immense hurdles that have been placed in her way, she sits at her easel, picks up a mirror and paints a self-portrait because, as a subject, she is always available.

Until the twentieth century, art history was, in the main, written by white men who tended to write about other white men. The idea that women in the West have always made art was rarely cited as a possibility. Yet they have - and, of course, continue to do so - often against tremendous odds, from laws and religion to the pressures of family and public disapproval.

In The Mirror and the Palette, Jennifer Higgie introduces us to a cross-section of women artists who embody the fact that there is more than one way to understand our planet, more than one way to live in it and more than one way to make art about it. Spanning 500 years, biography and cultural history intertwine in a narrative packed with tales of rebellion, adventure, revolution, travel and tragedy enacted by women who turned their back on convention and lived lives of great resilience, creativity and bravery.

Jennifer Higgie is an Australian writer who lives in London. Previously the editor of frieze magazine, she has written and illustrated a children's book There's Not One; is the author of the novel Bedlam and has contributed numerous essays to catalogues and anthologies. She is currently working on a new book about women, art and the spirit world, and various scripts.

“In this candid book by Jennifer Higgie, an Australian art critic, each painter endures some life-changing trauma. The stark message is that women need to suffer in order to make great paintings, and that trauma is the alchemical ingredient necessary for transforming talent into genius.”
— Celia Paul

“Higgie’s book is a useful primer for those seeking to understand the obstacles and challenges faced by women artists over the centuries, as well as a timely assessment of what it means to look at women artists from history today. It’s a subject that’s been covered before, but with Higgie’s background at Frieze, she’s equally plugged into the contemporary currents of feminist art as she is its historical context, lending the text an important freshness… For those wanting to move beyond biography and learn more about the why and how of the struggle of women artists to make their voices heard, The Mirror and the Palette is an important and brilliantly accessible resource.”
— VOGUE

"A master storyteller and brilliant translator of sensory experiences, Higgie makes us care about her artists as people. She is able to retrieve personalities from historical obscurity with just a few words. An eye-opening intervention in the
memory system of art history, The Mirror and the Palette is a major contribution, not least for the author’s appealing, accessible writing. She shows that we are still just coming to terms with how biased our institutions have been, and how much bigger the story of art really is."
— Julie M. Johnson

“Higgie has organized the book thematically to bob and weave through the ties that have bound female painters — and blow open the so-called liberties they’ve taken with their art. Coming exactly 50 years after Linda Nochlin published her famous essay ‘Why Have There Been No Great Women Artists?’ Higgie wants to lay the question to rest, once and for all.”
— Hillary Kelly

“As editor at large of frieze magazine and the presenter of Bow Down, a podcast about women in art history, Higgie has an extensive knowledge of the works of women artists, most of whom have struggled historically with being accepted as serious artists. An engaging analysis of the resilience of female artists throughout modern history.”
— Kirkus

“Higgie’s inevitably sprawling narrative taking its structure from what is essentially a group biography – though she [titles] her chapters not for the women they portray, but for vague moods and themes (Solitude, Hallucination, Naked). Artemisia Gentileschi, Angelica Kauffman, Alice Neel, Helene Schjerfbeck, Suzanne Valadon and – yes – Frida Kahlo: all of them are here. Among the less-well-known names she includes are those of the Australian artist Nora Heysen, and the New Zealander Rita Angus.”
— The Guardian

“Higgie’s writing is at its most emotionally evocative, even lyrical, when she imagines multitudes of women in their tiny attics and dimly lit studios, looking at themselves and deciding how they want to be remembered. She reflects the feelings of countless women, known and unknown… By skillfully balancing the historical and the imaginative, The Mirror and the Palette is not only a delight to read, but inspirational.”
— Arts Fuse