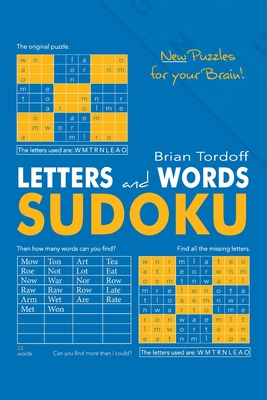 This new puzzle is like Sudoku that is used in many new books. But this one is different. It uses letters instead of numbers. It uses nine letters instead of nine numbers and the letters are not always the same. Each puzzle has a list of the nine letters that are being used in each puzzle. Just like the Sudoku puzzles there are nine groups of nine letters. There will be 2 parts for these puzzles. The first part is like the Sudoku puzzles. There will be a 9X9 table with some of the letters missing. This is just like the Sudoku puzzles, only it uses letters. This puzzle is still the same but it may use f t h b m g o e a, or,'s m l g b y i o u. Generally, 6 consonants and 3 vowels are used, but there may be times when 7 consonants and 2 vowels, or 5 and 4 are being used. There is also a blank table which is 4 columns by 9 rows. That is the area in which you will record the second part. You have already figured out what all the letters are; now you get to see how many words you can find. This is Part 2. Part 2 is completely different from the Sudoku. This is where you go through your answers to part one and see how many words you can find. Some of the puzzles have as many at 15 words and some as many as 25 words. It is all dependent on the letters that are used. This is the part than can really be difficult. You will be going through the puzzle, after you have done the hard work of finding all the letters, and trying to find words. All words in the answers are at least 3 letters long.