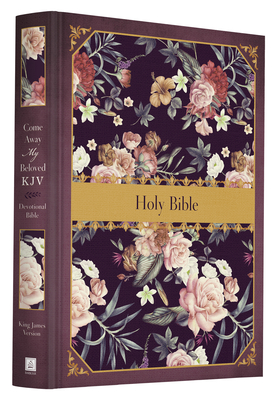 Would you like to get away to a quiet place. . .
a place of love and peace and joy and hope?

Here’s your invitation to “come away” with God.

Over the past 50 years, hundreds of thousands of people have read and enjoyed Come Away My Beloved—in fact, it’s sold more than a million copies. Now, to celebrate this golden anniversary, the Come Away My Beloved KJV Devotional Bible invites you into the Father’s presence.

Featuring hundreds of excerpts from Come Away, as well as seven other books by Frances J. Roberts, including  this beautifully typeset King James Bible also includes a built-in 365-day reading plan.

Frances J. Roberts wrote as if God were speaking directly to you, sharing the ministering spirit of the heavenly Father. This devotional Bible will inspire you to a greater devotion to God—the hallmark and legacy of Come Away.

FRANCES J. ROBERTS (1918–2009) is best known for her classic devotional Come Away My Beloved. She founded The King's Press in 1964, where she authored and published Come Away and eight other books, selling over 1.5 million copies in 30 years. After graduating from Moody Bible Institute in 1938, Roberts served as Florida’s state director for Child Evangelism Fellowship, writing the popular “Wordless Book Song” during her tenure there. An accomplished musician with eighty-eight published hymns, Roberts also taught at a Spanish mission school and worked as a professional accompanist, performing at various churches.