How I Survived a Chinese "Reeducation" Camp: A Uyghur Woman's Story (Hardcover) 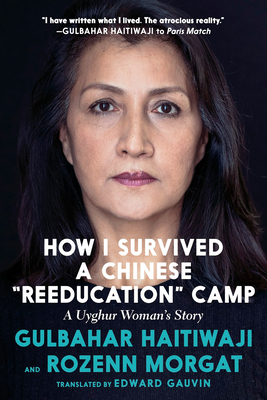 The first memoir about the "reeducation" camps by a Uyghur woman.

“I have written what I lived. The atrocious reality.”
— Gulbahar Haitiwaji to Paris Match

Since 2017, more than one million Uyghurs have been deported from their homes in the Xinjiang region of China to “reeducation camps.” The brutal repression of the Uyghurs, a Turkish-speaking Muslim ethnic group, has been denounced as genocide, and reported widely in media around the world. The Xinjiang Papers, revealed by the New York Times in 2019, expose the brutal repression of the Uyghur ethnicity by means of forced mass detention­—the biggest since the time of Mao.

Her name is Gulbahar Haitiwaji and she is the first Uyghur woman to write a memoir about the 'reeducation' camps. For three years Haitiwaji endured hundreds of hours of interrogations, torture, hunger, police violence, brainwashing, forced sterilization, freezing cold, and nights under blinding neon light in her prison cell.

These camps are to China what the Gulags were to the USSR. The Chinese government denies that they are concentration camps, seeking to legitimize their existence in the name of the “total fight against Islamic terrorism, infiltration and separatism,” and calls them “schools.” But none of this is true. Gulbahar only escaped thanks to the relentless efforts of her daughter. Her courageous memoir is a terrifying portrait of the atrocities she endured in the Chinese gulag and how the treatment of the Uyghurs at the hands of the Chinese government is just the latest example of their oppression of independent minorities within Chinese borders.

The Xinjiang region where the Uyghurs live is where the Chinese government wishes there to be a new “silk route,” connecting Asia to Europe, considered to be the most important political project of president Xi Jinping.

Born in 1966 in Ghulja in the Xinjiang region, Gulbahar Haitiwaji was an executive in the Chinese oil industry before leaving for France in 2006 with her husband and children, who obtained the status of political refugees. In 2017 she was summoned in China for an administrative issue. Once there, she was arrested and spent more than two years in a reeducation camp. Thanks to the efforts of her family and the French foreign ministry she was freed and was able to return to France where she currently resides.

"The book is most valuable as testimony. For Uyghurs, Haitiwaji explains, the camps are “a kind of urban legend,” made mythic by silence: “If no one talks about them, then the camps aren’t real.” Her memoir, dedicated “to all those who didn’t make it out,” contributes to a rich and painful body of memory-keeping that grows all the time."
—Jamie Fisher, The New York Times

"After being imprisoned for nearly three years, Haitiwaji, a member of the Uighur community, details in this rousing and courageous debut the brutal treatment she survived in one of China’s “reeducation” camps. Structured like a diary, her narrative begins in August 2016 at her daughter’s wedding in Paris, a celebration that’s tinged with sadness because those in attendance are living in exile, having left China after a crackdown against a growing movement for Uighur autonomy. A few months later, Haitiwaji was summoned to China, ostensibly to resolve a pension matter, and detained by government authorities. With her daughter accused of terrorism (she was seen holding a flag representing Uighur independence at a Paris protest), Haitiwaji was imprisoned, shackled to her bed for 20 days, and relentlessly interrogated. Her story grows more disturbing when she recalls the repeated violence and 11 hours of daily “education” she received over the next two years once she was sent to “school”: “this was brainwashing, whole days spent repeating the same idiot phrases.” Haitiwaji’s forthright descriptions of her harrowing experience at a modern-day concentration camp—before she was released in 2019 with the help of her daughter—offers a sobering look at the horrific ways genocide is still being enacted today. This urgent testimony will serve as a wake-up call to Western readers."
—Publishers Weekly

"Of this urgent first memoir about the 'reeducation' camps by a Uyghur woman, the author confirms: 'I have written what I lived. The atrocious reality.'"
—Ms.

"A current and deeply disturbing personal account of being targeted as a Muslim Uyghur . . . This memoir puts a much-needed face on abstract world news about the upwards of one million men and women estimated to have been taken from their families and jobs, imprisoned in camps, and 'reeducated' in western China. . . . Gulbahar’s is a brave and important voice; her choice to lay her name and face bare to speak as loudly as possible calls us, in turn, to witness, to amplify, to not look away."
—World Literature Today

"Gulbahar’s story is a truly powerful representation of resilience. As the Chinese Communist regime is actively seeking to undermine the values of freedom and democracy across the globe, we need only read testimonies like this one to know what the future world order will look like if the Chinese Communist regime is allowed to continue unchecked. Despite her suffering, her courage in the face of genocide shines through. May every person who reads it be inspired to confront these modern-day horrors and be an upstander just as Gulbahar has been."
—Rushan Abbas, Executive Director, Campaign For Uyghurs

"Gulbahar Haitiwaji’s beautifully written account of brutality in the Chinese government’s “reeducation camps” is a remarkable feat—accessible to all readers, deeply human despite the inhumanity detailed, and unsparing in its details of bleak efforts to destroy Uyghur identity. One constant throughout the book, and clearly throughout her life: Haitiwaji’s extraordinary courage."
—Sophie Richardson, China Director, Human Rights Watch.