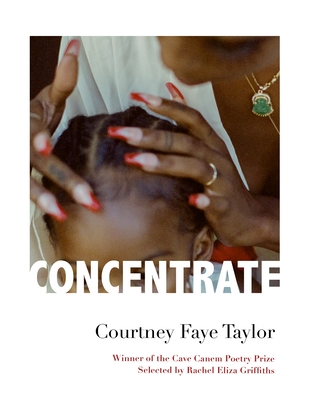 In her virtuosic debut, Courtney Faye Taylor explores the under-told history of the murder of Latasha Harlins—a fifteen-year-old Black girl killed by a Korean shop owner, Soon Ja Du, after being falsely accused of shoplifting a bottle of orange juice. Harlins’s murder and the following trial, which resulted in no prison time for Du, were inciting incidents of the 1992 Los Angeles uprising, and came to exemplify the long-fraught relationship between Black and Asian American communities in the United States. Through a collage-like approach to collective history and storytelling, Taylor’s poems present a profound look into the insidious points at which violence originates against—and between—women of color.

Concentrate displays an astounding breadth of form and experimentation in found texts, micro-essays, and visual poems, merging worlds and bending time in order to interrogate inexorable encounters with American patriarchy and White supremacy manifested as sexual and racially charged violence. These poems demand absolute focus on Black womanhood’s relentless refusal to be unseen, even and especially when such luminosity exposes an exceptional vulnerability to harm and erasure. Taylor’s inventive, intimate book radically reconsiders the cost of memory, forging a path to a future rooted in solidarity and possibility. “Concentrate,” she writes. “We have decisions to make. Fire is that decision to make.”

Courtney Faye Taylor is a writer and visual artist. She is a winner of the Discovery/Boston Review Poetry Prize and an Academy of American Poets Prize. Her work can be found in Poetry, The Nation, Best New Poets 2020, and elsewhere.

“Breathtaking, brilliant, and radical––Concentrate is the mouth that refuses to swallow America’s blackest desires, which have too long centered their wealth on the lives and deaths of Black girls and women. Taylor's debut is a deftly woven journey that offers us historical and psychic perspectives that are intimate and expansive, as these poems drag us, by syntax and grace, to our nation's threshing floor, which must be the page and the body. These poems guide readers through graphic meditations on guilt, innocence, innuendo, and how the constructs of form construct, and often destroy, any easy recognition of justice, or Self. Instead, we are seated, with bent heads, between the knees of an unbroken voice that demands to be heard and heeded. Extraordinary in craft, Taylor’s fearless poems appraise the arc of bullets and bodies devoured by America’s great hard dream. Incandescent in her excavation of language, and the perils of its erasure, Taylor breathes through every side of this wound. Concentrate is a tongue that fiercely grips the edges of love and memory before all is ripped loose. How fortunate to discover Taylor’s imagination, and her uncompromising heart, in such a world.”—Rachel Eliza Griffiths, judge's statement for the Cave Canem Poetry Prize

“Tensed into lopsided dichotomies, how do we anarchy the prevailing narratives that are jigsawed, sinewed, tentacled in white supremacy? In Courtney Faye Taylor’s incandescent, unflinching debut, Concentrate, the poet-artist is excavator, curator, collagist, sleuth, archivist. To mend then transcend, we must name complicity and its complexities: ‘south central / the valley / loiterer/ merchant / free huey / yellow peril supports black power / menace / menaced / riots / sa-i-gu / the los angeles black-korean alliance / black lives matter.’ Taylor textures fraught terrain, invisibled yet hyper-rendered, predatory—oppressed to be erased—making an alembic for the agency inherent in every living being, to oracle another future that is never guaranteed in this messy crucible. With tender, intrepid fierceness, innovation, and audacious fidelity, we bear witness, not only to the burn, but a phoenix rising. Concentrate is medicine, testimony, quest, anthem, balm, and seed that we all seek––need.”—Su Hwang

“This is not the cold archival work of gathering facts from acid-free boxes but archive as grieving, improvisation, autobiography and kinship. In examining Harlins’ life, Taylor also creates a mirror or double of her own.”—Ryan Lee Wong, Los Angeles Times

“To read Concentrate, to engage with Concentrate, is to dip a spoon into the undiluted good stuff and lift it to your mouth. To experience the too-muchness of history as a present tense event. To become part and parcel of the formal experimentation required to language the striations of the unbearable. Courtney Faye Taylor has constructed a collection that manages to be both derived from the inmost personal and prodigiously epic. . . . It allows the reader to participate in the long haul of remembering the disremembered.”—Diane Seuss

"Concentrate should be required reading for anyone who seeks to commit themselves to Black-Asian solidarity as theory and/or practice. This is a major work, a profoundly moving anti-erasure crafted with equal parts ingenuity and care."—Franny Choi

“This is a monumental work in the vein of Claudia Rankine’s Citizen from a remarkable new talent.”—Publishers Weekly, starred review

“Courtney Faye Taylor writes a syntax vexed by memory and grief in zone upon zone of language, history, and feeling. . . . This book radiates a cry, a name, ‘an incendiary grief’ so ablaze it touches everything. Concentrate is a riotous, gorgeously unruled text forged by sisterhood and resistance, across time.”—Aracelis Girmay

“This is a book that has many layers and forces the reader to not look away, to see alongside the poet, to bear witness beyond the Black female body and into the very soul of humanity.”—Angela María Spring, Washington Independent Review of Books

“Taylor’s lines disrupt even as they create and assemble, remembering Latasha Harlins and mourning the life sentences meted out to Black girls and women […]”—Cindy Juyoung Ok, Harriet Books

“Taylor shows us the plasticity of this word by braiding language together, just as her auntie spins gold from her scalp.”—Ashia Ajani, Split Lip Magazine