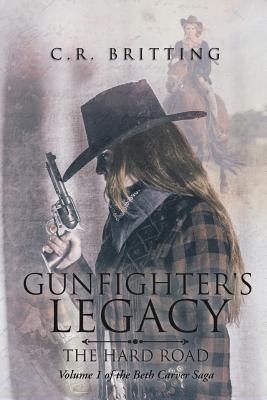 Elizabeth Carver is in a whole heap of trouble. Raised as a tomboy on her father's ranch in 1886 Colorado, she is criticized by the women and ridiculed by the men for not acting like a lady. Beth learned to shoot when she was twelve and ten years later she's mighty good at it. When the bank in town is robbed, she intervenes, wounding two of the outlaws. In doing so, she unleashes a storm that will engulf her and change her life. In revenge, the outlaws raid her family's ranch, steal their cattle and destroy her home. Then a well-known gunfighter rides into town. He has the coldest eyes she's ever seen. Why is he here? Has he come to kill her? Beth doesn't know and it scares her. A mysterious death, a secret vendetta, and the constant gossip and scorn of the townspeople increase the pressure. With her father hurt and the law ineffective, Beth finds herself in the fight of her life. Gunfighter's Legacy: The Hard Road is the first book in a trilogy about one young woman's quest to live life on her own terms. Elizabeth has a long, hard road ahead of her and she will need courage, ingenuity and her six-guns if she is to survive.