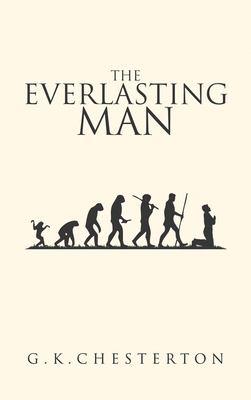 By G. K. Chesterton
This item is not available.

The Everlasting Man, written by Gilbert Keith Chesterton in 1925, is on the surface a response to H.G. Wells's The Outline of History, in which Wells ultimately argues for the theory of evolution over creationism. On closer review, rather than finding a typical discussion of faith and the mysteries of God as a response to the theory of evolution, readers will find Chesterton's own objective and passionate recount of human history and our evolution into the beings we are today, as well as the history and evolution of Jesus Christ and the Christian church.

Chesterton challenges readers, both Christian and non-Christian alike, to take a step back and objectively consider not only the concepts of evolution tackled in other works by authors like H.G. Wells and Charles Darwin, but to also give Christian recounts of creationism the same objective consideration. In his approach, readers will see that the Christian view of origin is just as scientific and logical as the various secular viewpoints. Unlike most Christian works on evolution and creationism, he does not argue against the idea of evolution. Instead, Chesterton asks readers to consider that humans have always possessed more advanced skills in communication and reasoning than other animals.

He also tackles the secular discussions of Christ as simply a historical figure, rather than the son of God. He reminds us that while Christ was human, his good works and teachings made him a more evolved human than those around him, and a figure who was ultimately born to die and be resurrected to help humans find the path to forgiveness for their sins. Chesterton's The Everlasting Man offers readers a great partner to H.G. Wells's The Outline of History in their journey to make an informed decision on their understanding and beliefs about the origin of humans and the existence of God and his son, Jesus Christ.