The War of 1812: A Captivating Guide to the Military Conflict between the United States of America and Great Britain That Started durin (Hardcover) 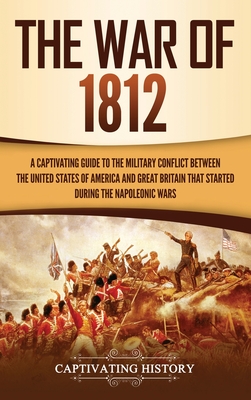 If you want to discover the captivating history of the War of 1812, then keep reading...

Among all of the conflicts that took place in American history, the War of 1812 is one of the most unique wars that helped to shape many of the important American milestones in the years to come. It was also a battle of surprises and irony as well--firstly, the weaknesses of both parties ultimately ended up being their respective strengths in the two years of constant fighting that started off in 1812.

Secondly, the War of 1812 was the most pointless series of conflicts for the parties involved, as the geographical borders ultimately reverted back to what they were before the war, meaning all the resources and manpower that was used or lost during the fighting was all for naught. The War of 1812 was a local war between Canada (which was still under British authority) and the US, as well as a part of the Napoleonic Wars of the early 19th century. In a way, the War of 1812 was a byproduct of the prominent Napoleonic Wars, which was fought mainly in Europe.

In The War of 1812: A Captivating Guide to the Military Conflict between the United States of America and Great Britain That Started during the Napoleonic Wars, you will discover topics such as

So if you want to learn more about the War of 1812, scroll up and click the "add to cart" button