History of Korea: A Captivating Guide to Korean History, Including Events Such as the Mongol Invasions, the Split into North and South, (Paperback) 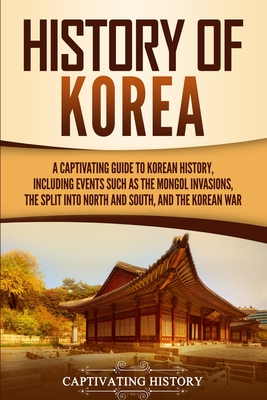 If you want to discover the captivating history of Korea, then keep reading...

The Korean Peninsula today is divided into two, but there was a time when this peninsula was divided into many states. Over the course of time, and besieged by expansive transient dynasties outside of this modest piece of land, many clans and tribes overran their lands. Of all those malicious and greedy potential overlords, none managed to prevail.

The soil is rich with the blood of the people who made Korea happen, and it is the Korean people who rose victorious among the maelstrom of dead empires led by hated tyrants and wars fought by people in lands far beyond their own. The Koreans are survivors, known for their persistence and courage.

In History of Korea: A Captivating Guide to Korean History, Including Events Such as the Mongol Invasions, the Split into North and South, and the Korean War, you will discover topics such as

So if you want to learn more about the history of Korea, scroll up and click the "add to cart" button